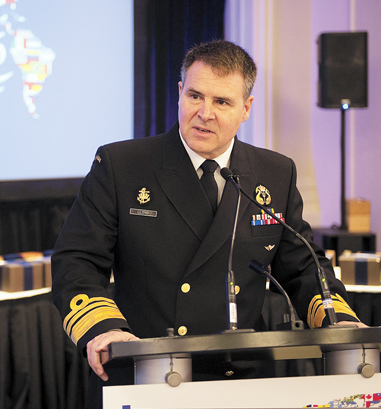 Nearly four decades of dedicated military service to his country has come to an end, and now Vice Admiral (Ret.) Ron Lloyd gets to enjoy civilian life.

June 12 marked a very special day in the Taber native’s life, where in 1981, he was accepted into the Regular Officer Training Plan and was officially sworn into the Canadian Armed Forces in Calgary.

Lloyd’s interest in military service was sparked by his involvement in the 225 Royal Canadian Air Cadet Squadron in Taber which is currently in its 77th year
of existence mentoring youth.

“With the Taber air cadets, I spent some quality time there and after it looked like the military would be a fascinating opportunity for me,” said Lloyd in a phone interview with The Advance from his home in Victoria, shortly after his retirement on June 12 2019, after 38 years of service to the day. “I had a couple of cadet instructors who said I could be an officer and I thought that was pretty cool.”

A trip to the high school counselor later to find out what was necessary for military service, and the first steps were taken that would eventually lead to Lloyd becoming the Commander of the Royal Canadian Navy, starting in 2016.

And it all started with the rural, small-town boy’s involvement with cadets. It is an institution Retired Vice Admiral Lloyd speaks glowingly of to this day, as he was the guest of honour at the 225 Royal Canadian Air Cadet Squadron’s 75th anniversary celebration back in 2017.

“At the end of the day, I firmly believe it is probably the best youth program in the country. At the end of the day, whether they join the military or not is not important. What is important is the discipline, the camaraderie, the leadership they get from that. Whether it’s air cadets, sea cadets or army cadets, they end up being leaders in their community, be it at the local level, provincial level or national level,” said Lloyd. “I can’t speak highly enough about cadets. If you want to gain insight into a nation’s future, look at its youth, and cadets helps with that. If that is our future, then we are in great hands in this country.”

He became commanding officer of the frigate HMCS Charlottetown in 2000 in which capacity he was deployed to the Persian Gulf.

“I say it’s a privilege to lead, so with your command appointments, your first one obviously is the most powerful. In Charlottetown, having the opportunity to deploy to the Middle East on behalf of the country and then (destroyer HMCS) Algonquin are probably the things I’m most proud of because you have the opportunity to have the impact on the most amount of people,” said Lloyd.

He became Executive Secretary to the Chief of Maritime Staff in 2002, commanding officer of the destroyer HMCS Algonquin in 2004 and Director General Maritime Force Development at National Defence Headquarters in Ottawa in 2006.

Canada’s sterling reputation on the military and diplomatic stage world stage is something Lloyd is very proud of, which he encountered over and over again in all his travels
around the globe.

“We in the navy, it’s really impressive, and I think there’s a direct correlation between the fact that we have had ships deployed and knocking it out of the park on behalf of ambassadors around the planet. Whether it’s the Gulf of Guinea, whether it’s NATO today, Indonesia-Pacific —wherever our sailors go, our ambassadors are very impressed with what they are doing,” said Lloyd. “I firmly believe Canadian sailors are the nation’s best ambassadors. In terms of where we fit, our sailors definitely have their heads held high in what they are doing for Canadians internationally.”

Lloyd was Acting Vice Chief of Defence Staff from January 13 to May 30, 2017, when Vice Admiral Mark Norman was relieved of his duties. Upon his retirement on June 12, A.G. McDonald was promoted to Lloyd’s former position.

“In my change of command speech, people asked me near the end what are some tips and qualities people should have to be successful and I basically said, passion, compassion and a work ethic in which I thanked my Mom and Dad for,” said Lloyd of a military career in which he received several awards and decorations. “You seek out those mentors early in your career and they are not always higher rank. They are simply people that can help make you be a better officer and noncommissioned member. They are people that can help you be a better leader, a better person or simply a better friend. The retrospective would be tremendous of people I’ve had the opportunity to serve with along the way who have provided you those pearls of wisdom that have enabled you to be a better person. Obviously you don’t get anywhere near down range of 38 years of service without support, doesn’t matter what rank, if you give 38 years to your country, that’s pretty impressive. It takes the love and support of a family to make that happen for sure.”

A decorated military career that spanned over four different decades, those qualities of dedication and perseverance all started as a young lad in Taber, instilling values that small-town life can give.

“I’ll always say it’s the work ethic, it’s the people in small communities in southern Alberta in terms of tightness and closeness in the community that puts people in good stead moving forward,” said Lloyd. “It’s that work ethic working out on the farm which most stands out.”

Lloyd granted The Times/Advance his first phone interview as a civilian, literally having officially turned in his military ID mere minutes before. Now being able to focus on family life with his wife and his love of wood working after arriving in his Victoria home early last week, it seemed so abstract even a few years ago, or months ago for that matter.

“When we landed in Victoria (June 17), it hit us that it is really here. It seemed so far off in the distance, and then pulling up in the driveway we thought ‘this is it.’ It didn’t even seem possible. But I’m looking forward to it, that’s for sure,” said Lloyd. “Wood working is first and foremost on the frontburner here. So I’ll have an opportunity to do some wood working and hopefully get back into some resemblance of physical shape,” he continued with a light chuckle.

As Retired Vice Admiral Ron Lloyd’s military service has come to an end in 2019, the former Taberite hopes he will be remembered for some things over others.

“I probably won’t be known for my patience,” said Lloyd in a moment of humourous self-depreciation as he took stock in his decades upon decades of serving his country. “But, I had a commitment to make things better for my sailors if there is anything I want to be remembered for. Just making sure my sailors had a better go of it every day than they had the day before. It’s been a great go. Walking around Ottawa and seeing the National Defence Headquarters, you think how fortunate I was to work with some incredibly talented people in that building. I don’t think Canadians truly appreciate how phenomenal our sailors are. Having the opportunity to hang out with them for 30-plus years was an honour to serve with them and their sacrifice.”