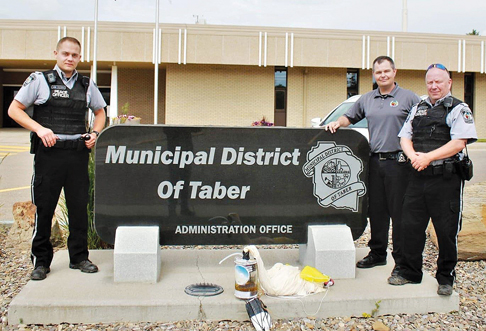 With Municipal District of Taber community peace officers on municipal roadways for the past year and a half, council is continuing their commitment to the program.

Effective since September 1, 2017, the program was first implemented after council elected to move on from the previous RCMP Enhanced Officer Program.

“There were concerns with partying. We also had some issues with the RCMP who were short staffed. The member we had for enhanced was being used by the RCMP. It wasn’t that our work wasn’t being done, just not to the extent we wanted. There was frustration because their policy would change every two or three years and quite often it would take a few years for the enhanced officer to get the training. We did have a meeting with the Solicitor General in Edmonton and at that time they said they were going away from that program,” said Coun. Brian Brewin, who along with Reeve Merrill Harris are the only two who were a part of that decision.

“We weren’t getting enough to justify the money we were spending so we chose to go in a different direction and start the CPO program. Basically the same amount on this program as we were spending on the enhanced officer,” added Harris.

Employing two officers, Dana Butler and Henry Peters, along with Sergeant Kirk Hughes, the program was also looked at as a way to help curb rural crime in the M.D.

“I was at that AGM (annual general meeting) where there were concerns. When I put my concerns forward, it was more to advocate for a stronger task force with the RCMP, not necessarily start our own program. However now that we have our own, I think that we are roughly only a year in. I don’t think it is a fair timeframe to evaluate where we are at. Specifically, we don’t have much data for crime reduction. I think it is a good program because the visibility is there and people know they are out there. I think they are addressing a lot of the concerns,” said Coun. Jen Crowson.

In the CPO strategic plan for 2019-2022, the vision is stated as “to be a successful Regional Enforcement Service respected as skilled law enforcement professionals, promoting public safety, through application of consistent education and enforcement, using both positive and proactive methods of crime reduction to create a community policing model consistent with the strategic goals of the Municipal District of Taber’.

With this statement, council was asked how they felt the program had been so far.

“I think it has been really good. It has been keeping a few things at bay such as overweight vehicles. We know there will be enforcement on that and it curbs some of that. In conversation with people I know, it has curbed their consumption of drinks if they are driving anywhere. I think it opens up things for the RCMP to focus on,” said Coun. Leavitt Howg.

One of the talking points from this year’s past AGM and other delegations talking about rural crime has been around extended hours for the CPOs.

“I think extended hours may be a benefit as well when you talk about crime reduction and safer communities. Having them out later in the evenings, especially the summer, Wednesdays and Sundays seem to be popular,” stated Coun. John Turcato.

While not originally a goal for the program, the introduction of officers into Taber area schools has grown since inception.

With RCMP also in schools, Turcato questioned how CPOs took on the education mandate.

“I think any peace officer program would be in the schools. In regard to D.A.R.E., when the old RCMP sergeant was here, there was an indication that it would be discontinued. Certainly in speaking with Sgt. Yetman, there has been a renewed interest in D.A.R.E and education in schools,” explained Hughes, who explained they taught a different program centred around bullying. “It is very different from D.A.R.E. They deal with drugs and alcohol, we talk about bullying. Both programs run together and it is not uncommon to have a police officer with the peace officer.”

The connection to the Low German Mennonite population was also pointed to as a big benefit from the CPOs, especially with CPO Peters. In terms of whether or not the M.D. was seeing what they wanted out of their CPO officers, it was pointed out they went that direction because it was something they were not getting with the enhanced officer.

“Quite honestly, we need to realize what we have. There are different levels of police officers for different jobs. If we are hiring CPOs to do investigations, we have the wrong people. These people don’t have guns and are not trained to do investigations, we need to decide what we want. Just because they are a CPO, doesn’t mean they can do everything. If we want the RCMP style, we need to be looking at RCMP. If we want bylaw, weights and measures, then we have what we want,” said Brewin.

While extended power was applied for by the M.D. CPOs when the program was first being developed, the Government of Alberta does not approve them for any program in the province.

“The enhanced authorities under the Peace Officer Act, there is lots of opposition to that in regard to K Division. When we applied for the enhanced authorities, we were denied for those responsibilities. It is province-wide, there is not an organization in Alberta that has these powers. In regard to the training provided, myself and Mr. Butler are both very confident to do that but if you give it to one (program), you have to give it to everyone. The province is just not set up for that yet,” explained Hughes.“ I think Councillor Brewin hit is on its head, CPOs have very unique and distinctive law enforcement roles. They are not police officers and I am very thankful for that because I have two very smart people working who don’t partake any further then they have to. There are a ton of municipal bylaws and lots of things that are needing to be enforced including weights and measures, traffic, distracted driving and the list goes on and on.”

The teamwork between the M.D. and RCMP though does bring a ton of benefits to both parties. With a lot of miles and activities to cover between the two, the ability to call on each other is a major plus.

Others on council were happy with the progress being made in the short life of the program.

“I’ve had one person comment to me that they got a ticket and I said ‘did you get a warning?’ and they said ‘oh yeah, been stopped a few times.’ It looks like it is working fine to me. Extended hours may be good on weekends,” said Coun. Murray Reynolds.

One concern brought forward was around whether or not the implementation of a CPO program was limiting the local RCMP detachment from getting reinforcements.

“One comment you said that concerns me is that we are supporting the RCMP. I’m not against that, I think that is important but I wonder would the RCMP in our jurisdiction be able to lobby for additional resources if they didn’t have us. Because we fill a gap. I see them doing check stops, you are out there when there’s an accident and making the scene safer for our fire department,” said Deputy Reeve Tamara Miyanaga. “It is great we are willing to do this but has it allowed you to free up your resources because we are all still paying the same amount of tax to the RCMP.”