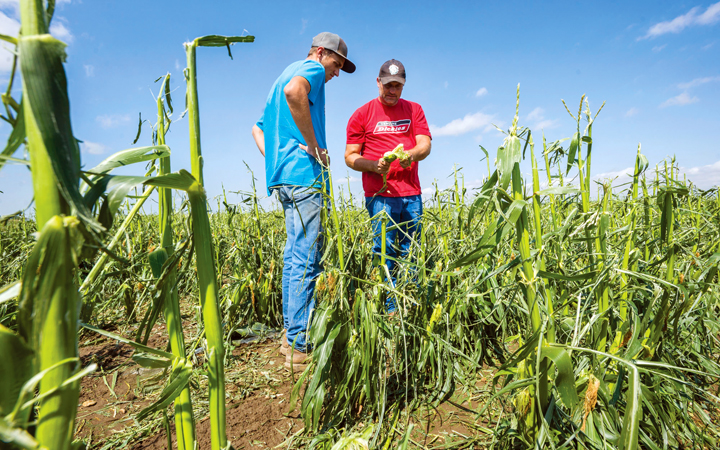 DEVASTATION: James Molnar looks at what is left of his corn crop along with his son Kyle near Barnwell after a major storm cut a strip of hail and wind damage along a rural stretch of Southern Alberta. ALTA NEWSPAPER GROUP PHOTO BY IAN MARTENS

While agriculture and weather are never certain, barring some unforeseen circumstance, Taber corn will be available for Cornfest-specific events along with some available for consumption at vendors in the aftermath of a severe hail storm that engulfed Barnwell and surrounding areas.

That being said, consumers who look forward to the summer treat every year are encouraged to get their fill early depending on how long supplies will last.

“People have been asking obviously because of the hail (Aug. 6). We had some stuff that was down enough where the hail hit it, but 85 per cent of it was perfectly fine and then there would be 10 or 15 per cent of the cob where the hail stones hit it. They just won’t develop, they’ll be a little white. The kernels won’t develop fully,” said James Johnson of Johnson Fresh Farms. “That is what we’ll have available (for vendors). We started on it (Tuesday) just to see if it’s fine. We’ll be out a bit (Wednesday) and save it up for the weekend.”

Speaking only for himself as a grower, Johnson added that just for Taber the farm pushes through approximately 24,000 to 30,000 cobs of corn for Cornfest weekend on a normal growing season. While Taber corn will be available for consumption, Johnson did note, unfortunately, the wrath of Mother Nature will lower the overall quality of the corn to a degree from farmers whose fields were hit hardest by the severe hail storm earlier this month.

“The quality that we’ve been accustomed to where we pride ourselves on a really high-quality product won’t be there as much,” said Johnson. “But given the circumstance, there’s not much we can do about it. Our plan is a day-to-day plan, where hail storms are funny hitting different patches and it’s tough to gauge overall damage in specific areas. But, we are pretty confident there will be corn at Cornfest with the corn that we have.”

Barnwell-area residents and farmers were dealt a loonie-sized hail storm with winds that reached 146 kilometres-per-hour that ripped through the area and neighbouring farms across southern Alberta, wiping out many crops in the process.

Jared Bell, chairperson for Cornfest 2019, through the Taber and District Chamber of Commerce, added the Taber corn supply will also include the ATB Corn Stuffing Contest, Rogers Sugar/Lantic Corn Tasting Competition and South Country Co-op Corn Eating Competition on Cornfest Saturday (Aug. 24) at Confederation Park, going on as planned.
“It is going to be local corn that is available for the Cornfest events,” said Bell, adding inquiries have been pouring into him these last couple of weeks on how the massive hail storm in early August was going to affect Cornfest. “There were a lot of questions about it for sure. Questions asking me of what corn would be available and where they could buy it. There was definitely lots of questions about what the corn situation would be and we had our hope that we would be able to get enough locally to at least supply us for the events, and we achieved that which is good news.”

Cornfest officially kicks off with the Taber Parade on Thursday at 4 p.m., followed by a farmer’s market at the side of the Administration Building from 5-7 p.m. In the evening from 5-11 p.m., families can enjoy their first taste of the midway located in the Taber Community Centre parking lot, with the midway going throughout Friday and Saturday as well. Opening ceremonies go at 6 p.m. on Thursday at the Cornfest Stage at Confederation Park.

Music and entertainment will be going on continuously on the Cornfest Stage from Thursday evening at 6:30 p.m. with Dance Images, all the way through Cornfest Saturday, day and night, with The Chevelles concluding with a two-hour set starting at 10:15 p.m.