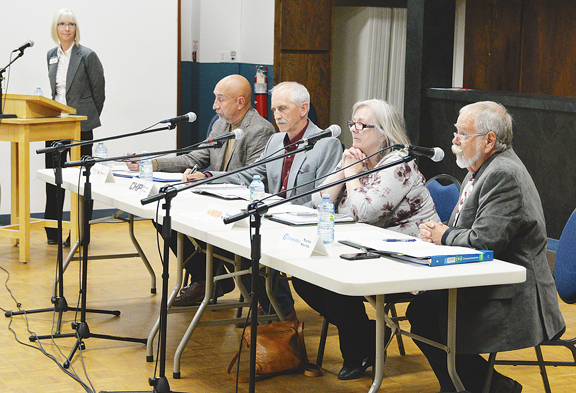 With less than two weeks now remaining in the 2019 federal election, local voters were given the opportunity to challenge candidates vying for a seat in Bow River during the election forum hosted at the Taber Legion Hall last Wednesday.

A crowd of around 50 attended the 7 p.m. forum, which saw candidates field questions from the panel and the floor for roughly two hours. Candidates in attendance were Martin Shields, Conservative Party of Canada – CPC; Lynn MacWilliam, New Democratic Party – NDP; Tom Ikert, People’s Party of Canada – PPC; and Tom Lipp, Christian Heritage Party – CHP. Liberal Party of Canada (LPC) candidate Margaret Rhemtulla and Green Party of Canada (GPC) candidate Hendrika Maria Tuithof De Jonge were not in attendance.
Dovetailing with the theme of October as Small Business Month (Small Business Week is Oct. 20-26), one of the initial questions to candidates centered on what each party would do to help one of the main drivers of the nation’s economy.

“Removing taxes for small business, the lifeblood of our country is small businesses,” said CPC candidate Martin Shields. “But they’re determined to tax us out of business. These are the guys that create the jobs, they’re the ones who risk the money, they’re the ones who have two employees, five employees, 10 employees — they’re going to tax them out of business if they get the chance. We need to reverse that process. We need to remove those taxes that affect the most directly. And the carbon tax is one of them.”

Taking a different approach, the NDP’s MacWilliam wants the country to target corporate welfare to help inject cash into the economy.

“I think we have to deal with the loopholes that are in our tax system. We’ve also got to deal with corporate taxes. The corporations are just not paying. They have a 15 per cent tax, and in 2000 they had a 28 per cent tax, and things were going a lot better in our economy than they are today…we’ve got to get that hoarded money that’s stuffed under corporate Canada’s mattresses out into the economy.”

Lipp with the CHP argued the Income Tax Act needs to be shattered into a thousand pieces, while promoting enhanced entrepreneurship.

“First of all, you have to simplify the Income Tax Act. The Income Tax Act is a mess; it’s super complex, and it should be demolished, destroyed. I would love to see a simplified tax where there would be no tax for the first $20,000 in income in proprietorships, and then a flat tax of 20 per cent from there on in. So we have to reduce taxes, and Mr. Trudeau is dreaming. Small businesses are the engine of our economy. There’s hundreds of thousands of engines, and we have to encourage them by reducing taxes. Secondly, I would like to reduce the regulations and the licensing, the inter-provincial barriers that hurt small business as well, the amount of paperwork that they have to do. The third thing we would like to do is really increase and encourage entrepreneurship.”

The PPC’s Ikert was matter of fact about his party’s tax plans, while incentivizing a strong work ethic among entrepreneurs.

“If you make between zero and $15,000 per year, you will pay no taxes. If you make between $15,000 and $100,000, you’ll pay 15 per cent, and anything over that is 25 per cent. Corporate tax will be dropped to 10 per cent, farm tax will be dropped to 10 per cent. We understand that unless there’s the opportunity for the entrepreneurs to make money, they will create jobs. When you squelch that and say ‘no, you can only make so much money’, why should anyone work harder if there’s no incentive?”

Other questions fielded by candidates during the initial portion of the forum included invasive species and their potential impact on local irrigation and agriculture, promoting greater economic diversity in Alberta, alleviating western alienation, and honouring and respecting veterans.

Recently rotating back to the forefront of concerns regarding western alienation, candidates were asked what their personal viewpoints were with regard to gun control in Canada.

More unnecessary red tape doesn’t solve any current problems, answered the CHP’s Lipp, who also advocated for citizens to be permitted to comprehensively defend their own properties.

“The Christian Heritage Party supports the right of peaceful, law-abiding citizens to own and use firearms for hunting, sport and self-defense. We do not see the RCMP as the first line of defense, we see self-defense as a the first line of defense, especially in rural areas. Now, guns don’t kill people, people kill people. So guns are not the problem, it’s the people who use the gun. People that have violent intent don’t typically register their guns. Give your head a shake here. So more regulations that don’t deal with the heart of the problem are just regulations, and a waste of time.”

Ikert’s PPC has pledged to axe Bill C-71 as one of their first acts in office.

“The PPC, the first thing we’re going to do is repeal Bill C-71, we’re going to replace the Firearms Act, and we’re going to target criminals. My guns are the safest thing in the world, you have no worry about any of my guns. But you have to worry about the people that get guns illegally, that are brought up through the States, and used in a violent act. Those people need to be sentenced harshly. I don’t care who you are, if you get a stiff enough penalty and you will learn.”

Shields has also targeted Bill C-71 for elimination, but would like to see tougher inspections to prevent illegal hand guns from entering at Canada’s borders.

“After the carbon tax, C-71 goes. This is a piece of legislation that penalizes legal long gun owners. It’s the first step back to what the Liberals would indicate they would like to do, long gun registration. We know how much of a fiasco that one was — it cost us $2 billion, it doesn’t prevent crime, it just penalizes legal long gun owners. The problem is the illegal hand guns in the major cities — illegal, smuggled in, registration numbers filed off — that is the problem that some major urban centers are finding. We believe in penalizing the use of hand guns in certain crimes with more severity, we believe we need to have better controls and inspections at our borders to keep those illegal hand guns from coming in. We don’t believe C-71 accomplishes any of those things.”

Another hot-button topic for local voters, rural crime has been on the rise in Alberta and each candidate had their take on how their parties would approach the problem.

The PPC would like to see more RCMP boots on the ground in the province, asserted Ikert.

“Policing is a provincial jurisdiction, but in this case I would like to see the RCMP numbers be increased. Because what we’re finding in Alberta is the RCMP have a contract to supply ‘X’ number of officers to Alberta, and they are unable to do that at this present time because they can’t train enough. I think the only thing we can do as a federal party is to encourage the RCMP to stand up and bring the numbers that they’ve promised Albertans.”

If property crimes are no longer considered worth enforcing for the justice system, argued the CPC’s Shields, this will only drag the dispensation of justice further into disrepute.

“The RCMP are undermanned, and the RCMP can’t be everywhere. But the RCMP frontline are frustrated, municipal police services are frustrated, because our court system lacks judges and prosecutors. Jason Kenney recently announced appointing more prosecutors. But the frontline RCMP and municipal forces know that they’re being told property crimes aren’t important, they’re not in the hierarchy of importance for us to deal with in the court system, so they’re being kicked or don’t bother with it. So you have your frontline police officers, what are they to do? Do they spend their time and energy on court cases that won’t even get to court? The fundamental problem here is we have to understand that we’ve got a problem with people that think crime is a way to make a living. We need to get that stopped.”

“Self defense, I agree, but these gangs that are coming and causing the crime are from Calgary. The RCMP have told us this. So let’s work together jointly with the Calgary force and the RCMP and try to get these gangs off the street and get them away from our communities, and get them away from our farms. We’re got so much acreage — and the RCMP can’t be everywhere, as Martin said — we’ve got to try to figure out a way of stopping this, and I think we have to stop it from the source…crime is not a business, and we’ve got to stop it by working jointly with Calgary, with Edmonton, Red Deer, all of the bigger communities.”

More questions were fielded about keeping families together as they age, eliminating internal trade barriers in Canada, promoting Canadian unity in the face of feuding provinces, agricultural issues in the election, immigration policy in Canada, and the rising tide of populist politics.