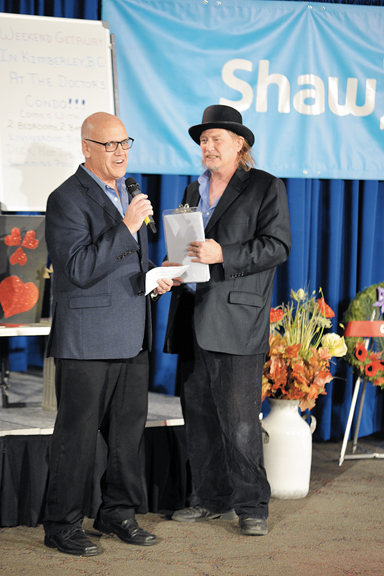 The Taber and District Health Foundation is about to celebrate a quarter-century of strengthening rural health care early next month.

The foundation will be hosting its 25th annual ‘Share in the Experience of Giving’ Telethon on Friday, November 1, from 2-8 p.m. live at the Heritage Inn.

“Being it’s the 25th annual, that shows you it has been running for a long, long time,” said Vicki Koersen, fundraising co-ordinator for the Taber and District Health Foundation. “I’ve been interviewing some of the older board members that used to sit on the board when it first happened, like Ray Bryant, Peter Bergen to ask them for some of the reasons why the foundation started.”

Before Alberta Health Services came in, regions were zoned where the Taber area was the Chinook Regional Zone. Any government funding that came in from the government for health care costs to hospitals/doctors, it was all funneled through Lethbridge.

“There came a point in the ‘80s when we got our new hospital here and people wanted money to stay here,” said Koersen. “We wanted to have funding that stayed and helped our own M.D. region, where people could specify where their funds were going to.”

Over the 25 years of the telethon, the foundation has helped raise over $6 million which has translated to the local hospital having continuous modern equipment.

“There isn’t one corner of that hospital that hasn’t benefited from the telethon,” said Koersen, adding this year’s funds raised at the telethon will go towards updating the maternity suites. “That area hasn’t been touched since the 80s. The lino is all cracked, wallpaper is coming off. It’s an OK environment, but it can be more bright, happy and welcoming.”

The telethon has allowed for Koersen to see exactly how generous the Taber/Vauxhall/M.D. of Taber can be in recognizing the need for quality health care in more remote rural areas.

“By keeping services here in Taber and investing in those services, it kept our hospital open because we are so close to Lethbridge,” said Koersen.

Koersen noted in helping aid health care costs, Mike Brand and Dr. Rob Wedel helped develop a best practices model with the Clinical ARP (Alternate Remuneration Program), negotiated by the doctors at the Taber Clinic at the time in the early 2000s. In this model of health care, doctors are paid in an annual amount for each patient who chooses to doctor through the Taber Clinic.

“This allows for team-based care which gives the doctors flexibility to provide services in different ways so they can spend more time with each patient and deliver a full range of care that encourages health promotion, wellness and teamwork with other health providers,” said Koersen. “The goal is to provide the community with increased access to primary health care by supporting stronger and long-lasting relationships with family doctors.”

It is a model Koersen added is found in very few regions of the province.

“What happens everywhere else is the doctors see the whites of your eyes and they get paid because they bill out. For any type of regular visit, our doctors don’t get paid extra with a fee cap type of idea,” said Koersen. “Northwest Calgary, Crowfoot Clinic is just starting this type of system and Innisfail has the start of this type of system. Otherwise, nowhere else in Alberta do we have this. Our doctors want you to be as a patient as healthy as you can be. Our doctors can take the time to spend the time with you because they don’t make any more money seeing 20 patients than they do seeing 15 patients in a day.”

Existing funds and upcoming fundraised funds are being used for equipment purchases includes seven ceiling lifts at $6,000 each.

“Ceiling lifts are used instead of a portable lift to maneuver patients in and out of their beds. It’s really important because it saves both the patient heartache and stress and also the staff,” said Koersen.

The foundation is looking at purchasing one or two bariatric beds at $42,000 each which holds patients that are between 250 and 1,000 pounds, which can extend both the width and the length of the bed for taller patients as well. Other bariatric equipment includes a commode/shower chair with tilt feature to help patients, valued at $10,000 each.
There are also two active-care beds which can extend for taller patients at $10,000 each.

Other improvements Koersen noted the clinic has been able to do is bring in ultrasound, so Taber/Vauxhall area will not have to go to Lethbridge to book an appointment.

“It’s so nice to have various services in our community. People are less stressed not having to drive bad roads in the winter and when they are in their own community, they have familiar people that they already know,” said Koersen.

Taber and District Health Foundation has partnered with six different radio stations for Nov. 1’s telethon, offering up promotion packages along with MCing. Also helping with some master of ceremonies duties is Taber’s own ‘Wild’ Bill Lawson, along with special guest and country crooner Trevor Panczak, who will be helping out with the festivities in the earlier portion of the telethon.

The telethon will include pre-recorded, but mostly live entertainment, including Trevor Moore, a comedian who does magic.

“We will be doing some live interviews along with some demonstrations of equipment that we have purchased, along with interviewing people who have used it,” said Koersen.

The 25th Annual Share in the Experience of Giving Telethon goes Friday, Nov. 1 from 2-8 p.m. at the Heritage Inn.