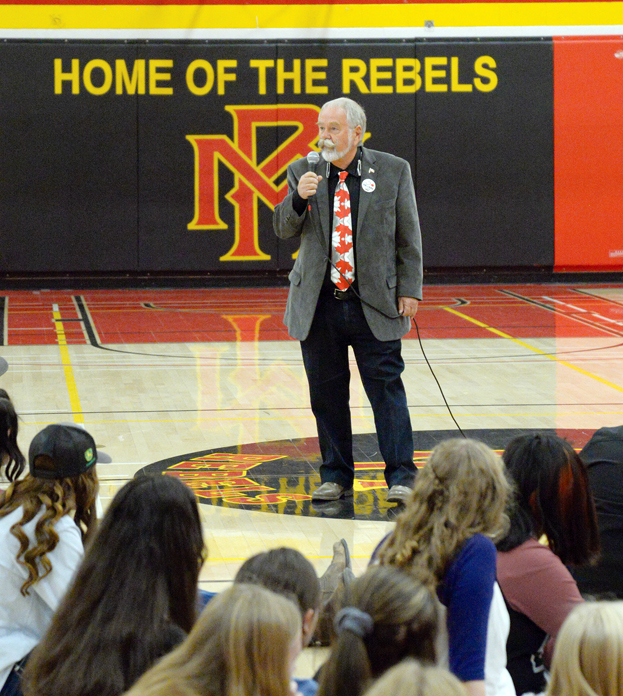 Following an incredibly tight race to the finish line on the national hustings, there were few questions about who was on top in Bow River as incumbent Martin Shields and the Conservatives cruised to a landslide re-election victory in the riding on Oct. 21.

“It was tremendous support across the riding, it’s humbling to win by that percentage,” said Shields in an interview with the Advance on Tuesday morning. “It’s been great being out in the campaign, knocking on doors, doing forums, meeting the people. There was such tremendous support out there, but until they count the votes, you just don’t know. It was a fantastic result in the sense of what we worked out in the constituency, and the team that worked, to do it all over — the people who went door knocking, the people who put up signs, the people that came out to the forums — it was just great.”

On the federal front, the electoral landscape has arrived as a far more complex animal, with Justin Trudeau and the Liberals poised for an attempt to wrestle it into submission by forming a minority government, potentially propped up by a shrunken contingent of 24 NDP MPs or even a trio from the Green Party.

“Obviously we would have preferred a better outcome in the sense of winning more seats than we did, but on the other hand the country decided that Trudeau wasn’t the person they wanted to have a majority government, which is absolutely right,” said Shields. “We don’t believe the Liberals should have been back in government, and the reduction of seats indicates that response. We’re in a minority situation, which is a different kind of governing, but understanding that Canadians felt the Liberal Party wasn’t worthy of being a majority government again is an indication of the challenges we have ahead in this minority.”

In Bow River, Shields secured 45,691 votes for 84.1 per cent of the vote, trailed distantly by Liberal Margaret Rhemtulla with 3,104 votes, or 5.7 per cent. Nearly tied with Rhemtulla was the NDP’s Lynn MacWilliam, who took in 3,010 votes for 5.5 per cent. People’s Party of Canada candidate Tom Ikert had 1,302 votes for 2.4 per cent, followed by the Green Party’s Hendrika Maria Tuithof de Jonge with 805 votes and 1.5 per cent, while taking up the rear was Tom Lipp for the Christian Heritage Party with 445 votes, good for 0.8 per cent.

“In this riding, it was the support for agriculture, trade, the resource sector, getting the pipelines built, and they were very angry about what has happened with the Liberal government,” said Shields. “There was a tremendous amount of anger about how agriculture and the resource sector have been hampered by the Liberal government, and they wanted change…that’s what I heard day after day, door after door.”

Andrew Scheer’s Conservatives have captured 121 ridings, forming a large cohort on the right that will no doubt present a stout challenge to Trudeau’s now-chastened Liberals with 157 seats. Back from parliamentary oblivion in Quebec is a resurgent collection of 32 Bloc Quebecois MPs, who are sure to be a wildcard in this Parliament as third parties often carry an inordinate weight in a minority House.

Shields, a long-time teacher and school administrator, served previously as the mayor of Brooks before his election to the House of Commons as the Conservative MP for Bow River in 2015. In 2015, Shields captured 38,701 ballots for 77.4 per cent of the vote, trailed distantly by the Liberals’ William Alexander, who took in 6,840 ballots for 13.7 per cent.

“Truly humbled for the support out there. There’s so many excellent people out there trying to make a go of it, working hard, whatever industry they’re in, and whatever community — but to come out and support with the vote, it’s truly an honour to represent the people of Bow River,” said Shields.