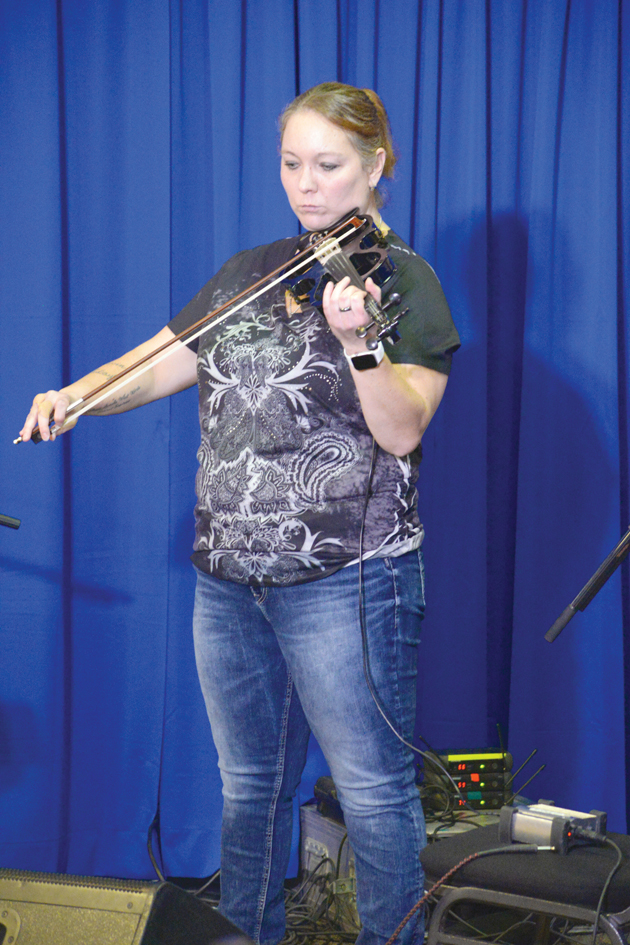 MUSICAL TALENT: Pamela Harder played both the violin and piano during her hour of musical performances at the telethon. ADVANCE PHOTO BY COLE PARKINSON

Enjoying the afterglow of another successful endeavour, positive feedback has been flowing in that the 25th annual ‘Share in the Experience of Giving’ Telethon was one of the best yet.

“This year was so much easier than last year. I really liked the variety of hosts that we had. A huge shout out to the radio stations for bringing their own morning show announcers. It was fun. It took something small town, and made it just a little bit broader,” said Vicki Koersen, fundraising co-ordinator for the Taber and District Health Foundation, adding it also helped lessen the burden of MC regular ‘Wild’ Bill Lawson from carrying the whole show non-stop. “Bill is awesome. He’s so great at playing off of other people. Having someone who knew the program and knew the show and expanding on it, it was fantastic. The turnout was fantastic, with donors from all over the M.D.”

So fantastic that as of last Friday, with pledges having trickled in still from the telethon which ran Nov. 1, Koersen said the telethon was sitting at just under $215,000 raised. The main focus of this year’s telethon was to update the maternity suites at the Taber Hospital, among other things.

“It was nice this year to be able to have a focus or a goal. If we raised enough funds, we could do this project. I think that’s important for people to see that benchmark. They are seeing what their money is going towards as opposed to just a general coffer,” said Koersen. “That’s the point of doing the interviews during the telethon, and the demonstrations of the equipment, so people can see the visual. That’s important, it gives us accountability and it shows the people something concrete that their money is going towards.”

Also, with the multiple hosts that helped at the telethon, which also included southern Alberta country crooner Trevor Panczak, Koersen was amazed at the variety of entertainment which included performers from all over southern Alberta, including Vauxhall who is just down the road on Highway 36 North.

“There were so many great local performers,” said Koersen. “It was really good. I like the new talent that is coming up and there are the tried and true performers too that we’ve always had. The feedback I’ve had is the performers really enjoyed it as well with the format. They get a feel for what the whole showcase is like instead of getting in and get out.”

Koersen noted the challenge now is how to maintain the telethon, yet attract new donors.

“The telethon is the ask for the people in our area,” said Koersen, adding other initiatives throughout the year have helped keep the Taber and District Health Foundation on people’s minds. “I think our Thankful Thursdays have helped. Every Thursday we try and showcase a piece of medical equipment or a donor, or someone in the hospital on our Facebook feed and Instagram. It might be Nurse’s or Doctor’s Week we showcase, or services we provide to keep up hat awareness. It has helped with how people perceive TDHF in having a more dynamic role within the hospital.”

There are also numerous third-party fundraisers throughout the year that aid the health foundation as well, including McHappy Day, Smile Cookie Day and the Kiwanis Golf Tournament.

“We also have to try and increase our visibility outside of Taber, because we help many people in the M.D. region,” said Koersen.

GUITAR HERO: Country singer Trevor Panczak has donated a guitar which has been signed by all the telethon performers, including himself, for people to bid on, with funds raised going towards the Taber and District Health Foundation.

Koersen has kept the bids open until the end of November, with the current highest bid at $250. If you would like to place a higher bid on the guitar, you can call Koersen at 403-223-7232. The guitar also comes with its very own Panczak musical CD or LP, depending on what one prefers.