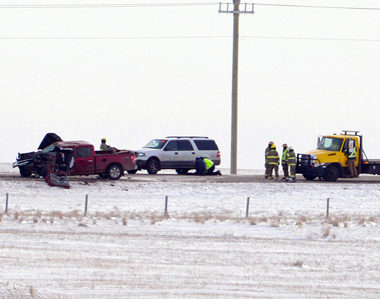 TRAGEDY: The twisted remains of a pickup still litters Hwy. 36 near the Hwy. 875 junction as an RCMP investigation continues. ADVANCE PHOTO BY TREVOR BUSCH

At approximately 7:15 a.m. on Friday, Station 5 (Vauxhall) of the M.D. of Taber Regional Fire Service was called to a two-vehicle head-on collision near Highway 875 and 36, which would claim the lives of four people.

“Upon arrival of the duty officer, extra resources were requested from Station 4 (M.D. of Taber Station) for south side of the river hill traffic control and for patient extrication at the second vehicle,” said Brian Schafer, fire chief of the M.D. of Taber Regional Fire Department, of the collision that happened near the Old Man River Crossing. “In total, six people were transported to hospital by ground and air. Our Regional Fire Service CISM team was also activated for follow up with our 21 members who were on scene. Crews were back in service around 12:45 p.m.”

Taber/Vauxhall RCMP also attended the accident which saw a van transporting a 10-person crew from Taber to work on the Prairie Sunlight II Solar Project near Vauxhall, collide with a pickup truck. Several vans of workers make the trip to the work site from Taber and back each workday.

“Thoughts and prayers go out to all of those involved in today’s accident,” said Schafer. “Our deepest condolences are sent out to those that lost their loved ones.”

Belectric Canada Solar Inc., which is the company constructing the solar plant facility, offered its condolences to the families, friends and co-workers of those impacted in a prepared statement to media and will be offering counselling and support services to its employees, contractors and service providers as they assist RCMP in their investigation.

STARS Air Ambulance and HALO Air Ambulance were deployed to the collision site, and were involved in transporting patients and EMS ground crews from Taber, Vauxhall, Brooks and Coaldale.

Traffic in the area was being diverted from Highway 36 between Secondary Highway 875 and Township Road 112. Emergency personnel had cleared all lanes of Highway 36 and re-opened it to traffic by mid-afternoon.

“(There were) also many bystanders on scene, who in -20 (Celcius) weather, stepped up and helped provide assistance with patients until other EMS resources could arrive to assist,” said Schafer.

Taber/Vauxhall RCMP, along with an RCMP collision analyst, continue to investigate.