HALO Air Ambulance in critical condition as it searches for funding 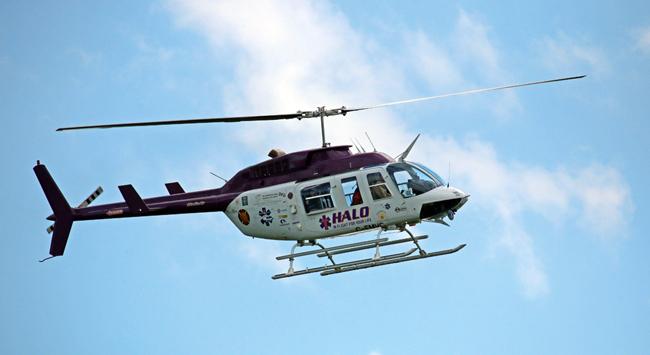 HALO Air Ambulance has reached a critical point in terms of funding for the organization.

Last week, the group put out a press release explaining their financial shape as the COVID-19 pandemic continues to have negative effects on all walks of life.

“The COVID-19 pandemic has decimated our ability to fundraise and as a result, HALO is on life-support. The viability of the program is directly and immediately threatened,” said Paul Carolan of HALO Air Ambulance in the press release.

An emergency meeting for the group was held and they determined HALO will be forced to scale back operations to a single-engine helicopter. Effective June 1, HALO will provide limited medevac operations with the single-engine helicopter for a period of 30 days, all HALO medevac operations will cease July 1, 2020, and a public relations campaign attempting to save the HALO program will be immediately undertaken. The press release explained the campaign will highlight the incredible successes of the program, the dedicated people that have volunteered tirelessly to keep it in service, and the far-reaching and unwavering local community support. The group is now asking for $250,000 a month to operate a program from the provincial government.

Since 2007, HALO has saved several lives including Edwin Camps who is from the area. Camps was in a severe farming accident south of Taber at the Oaklane Hutterite Colony that left him with a broken neck and a shattered jaw.

HALO flew Camps to Lethbridge where he was picked up by STARS who took him to Calgary.

“The doctors told me ‘we’re doctors and we’re not supposed to say this but when they brought you in, we didn’t think you’d make it.’ They said if HALO hadn’t been there right away, they thought I never would have made it,” he said. “Basically the only reason I am still alive is because of HALO. If it wasn’t for HALO, and don’t get me wrong, STARS saved me too and I give STARS a lot of credit but without HALO, I wouldn’t be here today. I give them all the credit.”

Camps has made a full recovery and is back to farming full time but he still gets emotional thinking of what may have been if HALO had not been there in such a short amount of time.

“I’m a good example. If HALO isn’t around in the future, guys like me won’t make it. I have a six-year-old now, who was six months at the time of the accident, he wouldn’t be growing up with a dad if HALO wasn’t there. It’s said an essential service like this may be cancelled because of funding.”

With a push for financial investment from the provincial government underway, Camps explained why the government should be supportive of the program moving forward.

“I used to be on the board of directors and it’s all based on volunteers. I saw on Facebook someone was asking how much the CEO was making and everything, and excuse my French but they make dick-all. It’s all based on volunteers and the cost they have is to keep those helicopters going. The company they get the helicopters from, they give them a huge deal because they want help too. With this whole Coronavirus going on, they can’t do any fundraising. It puts them in a big pickle. HALO has been basically without any government support except for financial injections from the provincial government, they’ve run their program for 13 years and it’s all been through volunteers and donations,” he said. “I don’t judge the government but they keep throwing money around but an essential service like this is being bypassed. If the government wants to do anything to keep this program alive, they better step up to the plate now or it will shut down.”

Camps also acknowledged how Taber and area have supported HALO and hopes they continue to do so as they head into this critical juncture.

The Municipal District of Taber also released a press release stating their support for HALO moving into this unknown financial territory.
“We call on the Government of Alberta to step up to the plate and fully fund HALO, as it does STARS and HERO, a helicopter rescue operation based in Fort McMurray. All citizens of this province deserve to have access to the lifesaving services of a helicopter air rescue, whether you are in the vicinity of a large urban centre or the remoteness of some areas of our municipality. We encourage all citizens of the municipality to contact their MLA and the Minister of Health and demand that this important service receive funding contributions from the government of Alberta,” reads the M.D. press release.

Town of Vauxhall council carried a motion last night to write a letter of support for HALO to the provincial government.