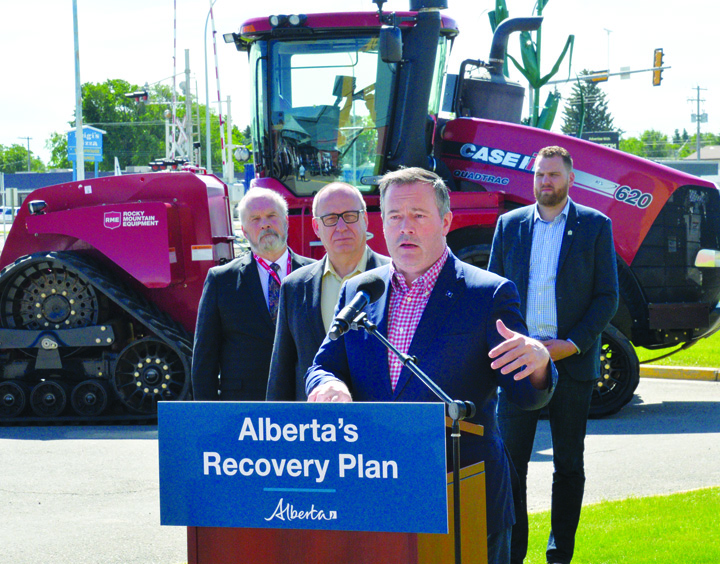 After years of pleading and advocating to twin Highway 3 east of Taber, the Alberta government has finally realized those dreams, starting next year.

“I am excited to announce that Alberta is moving ahead with further twinning of the Crowsnest Highway 3. Tackling the 46-kilometre section between Taber and Burdett with a $150 million investment which will create over 750 direct and indirect jobs,” said Kenney to a large audience outside the Taber Aquafun Centre. “It will make the Crowsnest safer for the nearly 4,000 people who drive this section every day. It will boost the efficiency of transportation in the region, contributing to long-term growth here in southern Alberta.”

With municipalities in the region, along with the twinning association, pushing for this project for several years, the premier acknowledged the patience that was required.

“I know a lot of you folks have been pushing for this for a long time so I want to say thank you for your patience and unfortunately, it took a crisis to finally get it done but we’re getting a lot done right now,” he said. “This is partly about strengthening the huge agribusiness sector in this region to move its ever-expanding volumes of raw and processed food products to national and international market. This isn’t just cars and trucks going down the road, this is about a big, long-term, strategic plan to have the infrastructure to support growth in our dynamic ag sector. The Crowsnest Highway is like the region’s coronary artery. It pumps investment and wealth into it, and pumps high-quality food products out of it to consumers across North America. Planning and design work begins immediately and construction begins next year, creating hundreds of local jobs during the project’s lifespan.”

With construction set to begin next year at some point, completion of the project is slated for 2023, according to the Alberta government.

Also on hand was Coaldale town councillor Bill Chapman, who sits as the president of the Highway 3 Twinning Development Association, and Kenney highlighted the fact he was a major reason this project continued to come forward to the UCP government.

“Thank you for not relenting and thank you for your patience, today you are getting it done,” said Kenney.

Chapman pointed to a current Municipal District of Taber councillor for the reason the group was able to continue forward with their mission.

“I would also like to thank Coun. Brian Brewin. He’s the one that really revived the whole vision again. For a while, it was in the low skirts but now we’ve been able to get back on track,” stated Chapman. “By twinning this highway, our ability to continue to produce the only source of Canadian sugar, 100 per cent, will continue to be conducted in an efficient and safe manner. Agriculture must play a larger part in the economic portfolio of Alberta and through this investment, and road infrastructure, we believe it is a solid first step.”

Bringing the press conference to the town of Taber was exciting for local town administration and town council as they have been waiting for this project for years.

With Taber councillor Jack Brewin being a representative on the Highway 3 Twinning Development Association, their council was excited to see some of their efforts come forward with the desired result.

“It’s huge, and that’s probably the right way to explain it. It’s been a long time coming here. Some of the benefits are hard to measure initially but in the future, there will be a multitude of benefits from this project,” said Taber Mayor Andrew Prokop in an interview with the Advance after the announcement. “We have our representative from council and I’ve sat in on some meetings in the past when our representative couldn’t but it’s one of those things where you do what you can. There is never any guarantees when it comes to moving forward with a major project. Basically what has happened is a great deal of perseverance and that is the result of where we are today. This announcement is coming to fruition from those particular efforts.”

The added safety of a twinned highway is not only going to be an advantage to residential drivers but also ag producers who head that way frequently.

“From the safety perspective, that is a huge concern, without having the twinning. So, having the twinning is definitely going to improve the safety side. That is a huge benefit to our community and southern Alberta all around,” continued Prokop. “Bottom line, as far as the safety element is involved, you can’t say enough about how important (twinned highways) are. The fact is this newly-designated 46 kilometres of twinned highway between Taber and Burdett will most certainly save lives.”

With the hope of having shovels in the ground come 2021, Prokop also touched on next year’s construction.

“I don’t know if we can talk timeline but there is a lot of work to be done. They were talking about a 2023 completion so I would expect sometime within a year to start, but that’s not in stone just yet. There is a lot of things that have to be dealt with to get to that stage. But that $150 million commitment is huge and this will happen.”

Similarly, the M.D. of Taber has also been vocal in their wish to see Highway 3 twinned east past the town of Taber and were delighted with the long-awaited project.

“It’s going to be a big boost for the area,” explained M.D. Reeve Merrill Harris, who also sits on the Highway 3 Twinning Development Association, in an interview with the Advance after the announcement.

“Safety is first, that was my biggest thing when I was advocating. Too many people have died on that stretch of road so when I heard this was going to happen, that was the first thing I thought about. As you’ve probably driven that road, if you get up behind somebody, some times there’s no getting around them for miles and miles. It is great for the whole region, besides the irrigation infrastructure, highway infrastructure is necessary to move product. With Cavendish’s expansion, for example, they talk about 7,900 more loads and most of that production is moved that direction so it has to come through the municipality here on its way to Lethbridge, whether it’s Lamb Weston, McCain or Cavendish. With 7,900 more semis on the road, that’s a lot.”

As additional large load trucks hit Highway 3, the added twinned portion could lead to even more businesses looking at this area as a viable option to set up production, according to Harris.

“When companies look for somewhere to locate, not only is water and wastewater important for them but so too is transportation corridors. I think it is very positive. With the sunshine and water available, southern Alberta is an excellent place for these places to locate.”

While they had to wait a substantial amount of time before the project was approved, Harris and the M.D. council are happy they kept pushing for the twinning.

“They did the twinning up to Fort McMurray and they did the ring roads around the big cities and those projects are finally getting done. So, what’s next and why not this one? I think this is only the beginning and eventually, if we keep lobbying and keep pushing, it will be twinned from B.C. to Saskatchewan. This will be good for all of southern Alberta, not just our region.”

“I’d like to acknowledge the tremendous advocacy done by the Highway 3 Twinning Association and Bill Chapman,” said McIver. “I know you and the whole association, and the whole of southern Alberta have worked tirelessly to promote this important project to make it clear Highway 3 is a very important link for commercial and residential traffic for all of Alberta, not just southern Alberta. This is a busy and important region and while it is positive to see the increased growth in southern Alberta and other areas of the province, it puts pressure on our highways. Today is an attempt to deal with that.”

Along with the twinned road, McIver also highlighted a few changes that would also be coming with the project.

“The twinning of Highway 3 will improve safety, it will increase our capacity to produce, create and support jobs and economic development. I think it is a good project all around. It will include a couple of important realignments — one at Purple Springs and one at Grassy Lake. We hope this will enhance safety while making the road more productive and efficient. There will also be intersection improvements throughout the project, in particular at Grassy Lake and Highway 877.”

With this investment to the roadway, MLA Hunter made it clear this project was providing another motivation for businesses to look at southern Alberta.

“To all the agri-food producers out there, we say to you — we’re building it, now we invite you to come. Come with your investments and your ideas, come with your vision and leadership because Alberta is open for business. This long-anticipated project will not only bring jobs but opportunities for the agri-food sector. In addition, this investment will increase safety to this very busy stretch of highway. It will allow for a more efficient highway system. in the delivery of goods and services to nearby industry.”