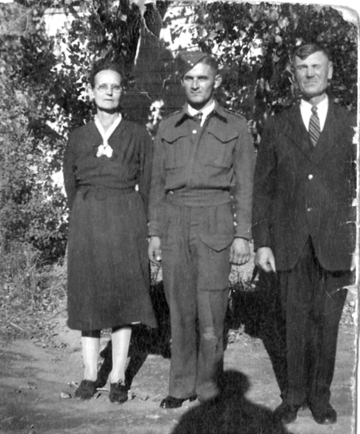 As part of Canada’s celebration of the 75th anniversary of the end of WWII, throughout summer 2020 the Times is publishing a series of articles on local history, our military past, and the contributions of veterans and citizens. There are the many who fought on the front lines and lost their lives to the Axis during World War II in making the ultimate sacrifice for their country. As people around the world celebrate this year, the 75th anniversary of the surrender of Nazi Germany to the Allied forces, what sometimes gets lost in the shuffle is the civilians who are very grateful for the freedom they achieved first hand from those soldiers.

Taberite Hans Visser just happens to be one of those, growing up as a young, seven-year-old boy in north Holland, in Opperdoes.

“I witnessed the whole thing. We were one of the last areas liberated,” said Visser. “As a seven-year-old, it just sort of grows on you and it happens. Being that young, you don’t really fully comprehend all that is going on around you.”

May 10, 1940, Adolf Hitler began his Western offensive with the radio code word ‘Danzig’, sending his forces into Holland and Belgium. Four days later, the Nazis proceed to bomb Rotterdam, aided by a force of 136 German divisions and a total of 2,500 German aircraft who blitzed areas all over Holland, Belgium, France and Luxembourg.

Hans’ father Klaas served for a few days as a reservist in the army, and the family workhorse was also called to duty.

“They needed it to pull the cannons and stuff. In the beginning, there wasn’t much change. We were vegetable growers and we basically kept going, and we were involved at a very young age working in the fields,” said Visser. “The products that we produced we had to share with the Germans.”

Soon afterwards, the Germans would build a large camp near the Visser farm, approximately two kilometres away. Hans’ mom was required to board two of the German soldiers at night.

“One thing I remember as a kid was we had a portrait of the Queen hanging on the wall. One of the German soldiers said ‘that Queen will have to come down.’ And my mom said ‘that Queen is going to stay there.’ And it stayed,” said Visser with a chuckle, remembering his strong-willed mom.

The Germans began rounding up young Dutchmen from ages 17-22 to work at places like ammunition factories in Germany, serving as replacement workforces for those Germans who went off to war.

“I had a cousin who went to work there and I didn’t see him again until the war was over. There was that fear I’d never see him again,” said Visser, adding another cousin (Marinnus) who was in hiding was not so lucky. “They caught him and he was shipped to a concentration camp and they killed him there. The reason being, he didn’t want to work for the enemy.”

Soon, Visser added, a Dutch Underground started to form where the locals pushed back against German influence, going in hiding when the Nazis looked for more recruits.

“By the time the war ended, we had about 500,000 boys who had hidden. Our family sort of lived outside the town and we had two of those guys. One was a farmworker so he blended right in, in the field, and the other was a watchmaker,” said Visser. “Anytime we knew the Nazis would come around to round up people, we were forewarned (by the Underground). It didn’t always work for all of us, but it worked pretty good overall. We had shacks in the field, and they would hide in the field instead. There were young Jews hiding as well.”

As World War II lingered into its second and third years, everyone was on food stamps.

“For these guys that were in hiding, that was a problem. For food stamps, you went to the post office which was the distributing centre where you had to bring your official papers,” said Visser. “If you’re in hiding, you don’t have any papers. There were times where the Underground would raid the post office and they got whole stacks of food stamps out of there. But often, there was retaliation by the Nazis.”

As the war lingered on and Hans inched into his double-digit years, he remembered how important faith was to his Dutch community in Holland. Churches would be packed, where those in hiding in the Underground would risk it and come to church to worship.

“I remember at one time, the pastor was halfway through his sermon and someone knocked on the door saying the young guys had to escape. They managed to get away through the back door of the church,” said Visser. “By the time we got out of church, the SS were standing in the front and the back, but didn’t catch them.”

During an air fight, Visser recalled a piece of a downed bomber (the wing) landed near their farm, and in the middle of the night the SS came around looking for pilots, scaring Hans and his brother Klaas.

By the fall of 1944, rampant hunger/famine had set in, where the south of Holland had been liberated, but the north hadn’t yet. War-torn towns and cities had citizens flocking to more rural areas looking for food, where tulips the area was best known for were now becoming staples to eat.

“We were farmers so we always had carrots and things to eat. But, people from the cities came begging with baby buggies to pick up a sack of potatoes. One good memory I had, was mom always had a boiler on the stove full of potatoes and whenever those guys came knocking on the door, mom fed these guys,” said Visser of the matriarch of the family in his mother Alice, adding the Visser family took in a young girl named Koosje that was part of a busload of children that came into town, escaping the city and needing help. “Her dad was in a concentration camp and her mother couldn’t feed her. She stayed until mid-June the following year, where her father did return from the concentration camp.”

Visser remembered fondly as a youth that Allied forces would sometimes make food drops in strategic areas of the Netherlands, where the odd drop would stray off to the rural areas for locals to get a treat.

“I still remember the cans, they were square tin cans. They had wieners in there, they had cigarettes, chocolate bars, canned fruit. Some of them would miss their target. We didn’t really need them, but some of them came our way. Dropping them out of a plane and parachuting them down,” said Visser.

Locals had heard of the famous invasion of Normandy in June 1944. Radios had been banned for use by the Nazis, but that didn’t stop some rural folks from hiding them in remote areas for people to listen to.

“Guys would go up in the haylofts to listen to the radios. Once they had heard troops were in Normandy they thought ‘now, we are free.’”

In the autumn of 1944, Allied armies liberated southern parts of the Netherlands.

On May 5, 1945, the German army in the Netherlands surrendered and the country celebrated the liberation. In the Dutch East Indies, it was the Japanese capitulation on Aug. 15, 1945 that ended the war.

“I still remember the Canadian army trucks rolling into town in the early morning. The hooting and the hollering, and the flags were out. The Germans had got a bit too cocky after the Bridge Too Far (around Arnhem),” said Visser who was now a teenager and officially liberated from the Axis. “It was an awesome event, seeing these guys come in in 1945. We were so thankful for the Canadians.”

Eventually, the Visser family would immigrate to Canada in 1949 to Picture Butte, where the Canadian influence back home is still very much celebrated in remembering their history.

“It’s still part of their curriculum, but who knows for how much longer seeing how it’s been 75 years now. Every Canadian grave on May 5, gets a little Canadian flag. It’s amazing,” said Visser. “We are so thankful thinking ‘why would you go all the way to Europe to liberate us?’ It has always been so special to us.”

Visser would travel to areas in Eastern Europe like Hungary, Poland, and Romania and found while people in the Netherlands had it tough, there were areas that had it even tougher, finding their freedom years later.

“You don’t realize what freedom is until you lose it,” said Visser, adding there was a very small fraction of Dutch people who were actually national fascists. “They saw Hitler as a saviour. They went through the hungry 30’s just like the North Americans did and people were very poor and the stock market had collapsed. There were some people who believed because Hitler put people to work. Because you had these small percentage of people, the Dutch Underground had to be so careful. The Underground was communicating with England back and forth.”