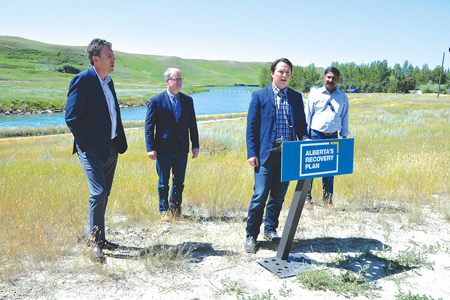 As part of Alberta’s $10-million Irrigation Rehabilitation Program, the provincial government is providing a $2.6 million grant to the St. Mary River Irrigation District (SMRID) to enhance water management and delivery in the district.

Agriculture and Forestry Minister Devin Dreeshen made the announcement earlier this month at Chin Reservoir south of Cranford on Highway 3.

“There’s no question that 2020 has been a challenging year for everyone in the agricultural sector,” said Dreeshen. “We’ve had everything from the COVID pandemic to negative oil prices in Alberta, so it’s time for some good news. The potential that irrigation has in Alberta is incredible, and is that good news story.”

The funding is intended to ensure Alberta’s irrigation districts continue to improve water infrastructure that provides water for irrigation and agricultural operations, as well as a wealth of other opportunities in other sectors.

“This grant is part of the years’s overall $10 million rehabilitation funding that’s going to over a dozen irrigation districts,” continued Dreeshen. “Today’s $2.6 million grant announcement to St. Mary will ensure this district can continue to improve its infrastructure, infrastructure that is vital to this community. We will also support the district in carrying out irrigation projects that are so critical to everyone that depends on them. That ranges from agriculture operations, municipalities, recreational areas, wetlands and wildlife habitats. Ultimately, southern Alberta’s agricultural industry would not survive without water and the irrigation infrastructure that delivers it.”

“It’s exciting to see the different projects that we’ve brought into this riding, and this is going to be one more exciting project that we’re excited about. One of the things I want you to know is this area down here, there’s something really valuable about down here in southern Alberta — we’ve got the heat units, we’ve got some fantastic irrigation infrastructure, and we also have some of the most dynamic individuals, our farmers and ranchers. And because of that, that makes this a very special place, a place where we can actually get things done. The premier is very interested in making sure that this is the agri-food corridor in Canada, and in order to be able to do that, we have to provide the proper infrastructure.”

Rehabilitation projects supported by these grants include lining unlined canals, converting canals to pipelines and other work. These projects increase the water conveyance network’s efficiency, allowing more acres to be irrigated with the existing water allocation.

Started in 1969, the Irrigation Rehabilitation Program is a long-standing grant program that provides cost-shared funds to irrigation districts to rehabilitate irrigation infrastructure. Government of Alberta investments through the program are matched by districts at a ratio of 75 per cent government to 25 per cent district. SMRID is receiving $2,651,848 from the program.

“We’re going to invest $10 billion in infrastructure projects all across Alberta to grow the economy and get people back to work,” said Infrastructure Minister Prasad Panda. “This $10 billion in investment is actually 40 per cent more than what we budgeted in the 2020 budget, which was $7 billion.”

Dreeshen singled out Hunter for special praise as a tireless advocate for irrigation improvement and expansion in cabinet.

“He’s probably one of the biggest advocates in cabinet for irrigation. So you have a double whammy there, with a guy that understands red tape and how it can slow down business or halt expansion, but also sees first hand the value and tremendous benefit from irrigation.”

Every year, Alberta’s irrigation industry supports about 56,000 full-time jobs and contributes about $2.4 billion in labour income, while providing $3.6 billion in GDP annually to Alberta’s economy.

Within Alberta’s irrigation districts, there are more than 42 reservoirs and about 7,600 kilometres of conveyance works, including canals and pipelines, which carry almost two billion cubic metres of water per year. Alberta’s irrigated land makes up almost 70 per cent of all irrigated acres in Canada.