Raymond to turn up volume for Metallica drive-in concert 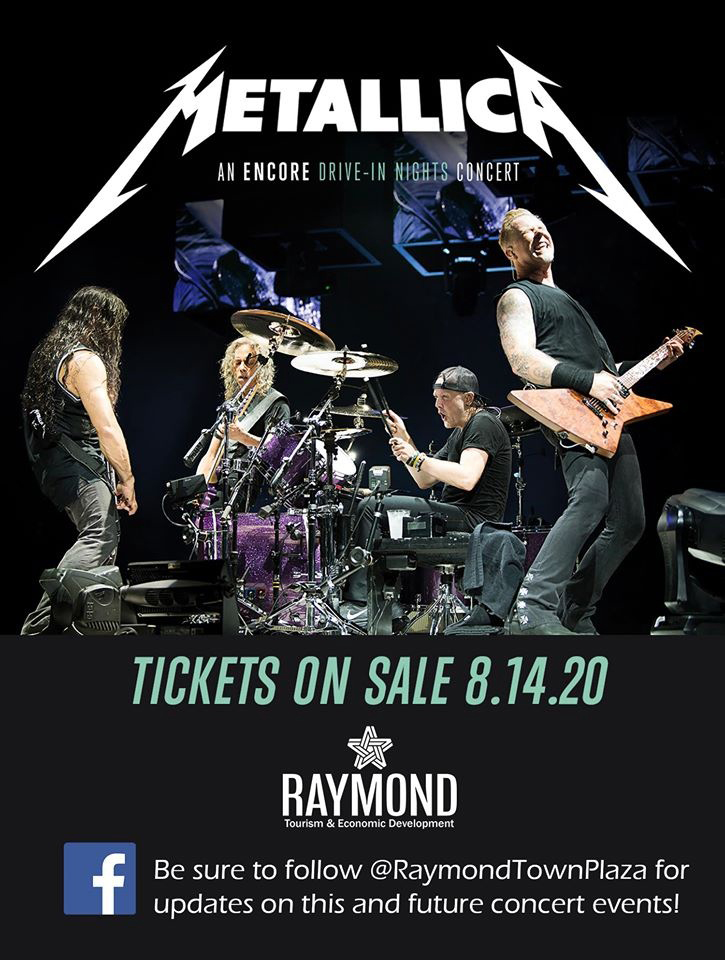 The Masters of Puppets are going to grace the big screen in southern Alberta.

In the only showing in Alberta, the Town of Raymond will host a drive-in style performance from metal legends Metallica Aug. 29 as the Encore Drive-In Nights concert feature rocks the four-storey screen at the Raymond Drive-In.

The on-screen concert is exclusive to drive-in theatres in North America including one in B.C., two in Saskatchewan and Manitoba, 10 in Ontario, three in Nova Scotia and one each in New Brunswick and Quebec as music fans settle for concerts on the big screen while the COVID-19 pandemic continues to shut down live performances.

“Because we’re the only venue in Alberta, Raymond is a little maverick at times and we like to go for big things. We don’t see barriers, we see opportunities,” said Greg Robinson, director community development and human resources for the Town of Raymond.

Less than a month ago, the Raymond Drive-In, located at 53 West 500 North, hosted another drive-in from Blake Shelton, Gwen Stefani and Trace Adkins, a 150-vehicle sellout.

“It’s a bit of a different concept so it took a little bit of traction,” said Robinson. “People are thinking it’s just a video of a concert and it kind of is, but it’s a unique concert that it is created just for these events. Metallica has completed their performance and is fine-tuning it and making it a very worthwhile show to attend and you’ll only be able to see this for one night. It’s not to be sold or shown anywhere else.”

Alberta Health COVID-19 guidelines will be in effect in order to protect the health and well-being of those in attendance.

Staff will wear personal protective equipment and enforce at least six feet of space between cars.

Guidelines around concessions will be enforced to abide by Alberta Health rules and regulations.

“We’re making a lot of efforts to make sure everybody can have a safe time, but also have a good experience,” said Robinson. “There are about 14-foot-wide stalls and between the front of the stall and the front of stall behind you is about 30 feet. There is a lot of room for you to enjoy the show, whether you decide to sit in your vehicle or just outside your door. We have people there to make sure people aren’t mingling it up. We had so many good comments from Blake Shelton. People were really well behaved and observed the rules we put in place to keep everybody safe, but still have a good time.”

“More people sat in their car than sat outside of their vehicle. It’s a summer night, so it’s hard to say what they feel they might want to do. But we’ve given them enough space so everybody can be safe. (At) Blake Shelton, some of them sat on the roof of their car or they backed in with their truck and sat in the bed of their truck. But they all stayed in their zone and everybody had a good time.”

Being the only viewing spot in Alberta, Robinson noted the tourism opportunities for Raymond.

“I had envisioned a 50-50 split for people from Raymond that would attend shows like this and 50 per cent from outside Raymond. But it way exceeded my expectations. I think for Blake Shelton we only had about 25 cars from Raymond and the rest were from outside of Raymond. We had cars from Medicine Hat come to Blake Shelton and probably half-a-dozen cars from Calgary. We had Red Deer, Airdrie, Claresholm and even Edmonton. I had a lady phone me (Tuesday) morning and she’s buying four vehicles. So her whole family is coming from Edmonton and she said they’re making a whole weekend of this. This is their vacation. That’s what the benefit is. These are people that would probably have no other reason to come to Raymond, to be honest. So it provides us with an excellent opportunity to show off what Raymond is all about.”

Tickets are on sale for the concert at http://www.ticketmaster.com/encore-metallica.