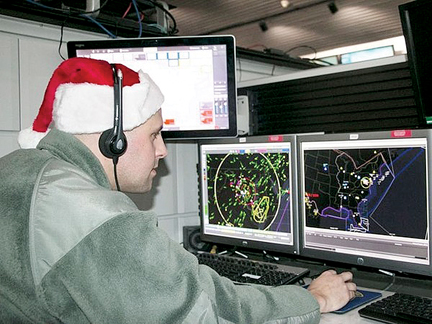 NORAD tracks everything that flies in and around North America. On Dec. 24, its special mission is tracking Santa!

NORAD is proud to be celebrating 65 years of tracking Santa, using the same assets and procedures used to track all threats to Canada and the U.S. — 365 days a year. NORAD defends the homelands by utilizing radars, satellites and jet fighters. These same assets help ensure Santa’s safe travels Dec. 24 each year.

Although the impact from COVID-19 has been significant across the world, NORAD continues its mission utilizing a multifaceted array of capabilities. Santa tracking starts with the NORAD radar system called the North Warning System. This powerful radar system has 47 installations strung along Alaska and northern Canada. The moment the radar system indicates Santa’s departure, NORAD transitions Santa tracking to its satellite systems. NORAD also uses a variety of radar sites worldwide to track Santa’s location.

Satellites are located in a geo-synchronous orbit (meaning the satellite is always fixed over the same spot on the Earth) at 22,300 miles above the Earth. The satellites have infrared sensors, which allow them to “see” heat.  In other words, when a rocket or missile launches, a tremendous amount of heat is produced, enough for satellite sensors to detect.

Rudolph’s nose gives off an infrared signature similar to a missile launch. These satellites detect Rudolph’s red nose with no problem. NORAD also uses fighter jets to track Santa. Canadian NORAD fighter pilots, flying the CF-18, are always on alert to protect North American airspace from potential violators. They are prepared to rendezvous with Santa in Newfoundland and welcome him to North America on Dec. 24. Then, other CF-18 fighter pilots are ready to escort Santa at numerous locations in Canada. Even though Santa flies faster than any jet fighter (Santa would actually slow down for NORAD to escort him), all of these systems together provide NORAD with a very good continuous picture of his whereabouts.

NORAD has been tracking Santa since 1955 — when a young child dialled the misprinted phone number from a department store advertisement in the local newspaper. That phone number rang into the Continental Air Defense Command (CONAD) Operations Center in Colorado Springs, CO.

Air Force Colonel Harry Shoup, the commander on duty that night, was quick to realize a mistake had been made, and assured the child he was Santa. He then assigned a duty officer to continue answering calls. Thus a tradition was born, and continued when NORAD was formed in 1958. Each year since, NORAD has dutifully reported Santa’s location on Dec. 24 to millions of children and families across the globe.

According to Capt. Cameron Hillier from NORAD, while COVID-19 has changed things for NORAD and the NORAD Tracks Santa program — the fact of the matter is, folks can still call in on Dec. 24 to get updates on Santa’s location throughout Christmas Eve.

“One big change, however, is we’ll have a reduced call centre staff — mainly just to ensure we protect our personnel and maintain social distancing for everyone’s safety. If you don’t get someone on the line for an in-person update, we’ll have recorded updates for anyone who can’t get through,” Hillier noted.

Preparations for the program usually kick off in March and the momentum picks up around August. Leading up to and through December, it’s full-tilt ahead in prep mode.

“There’s folks that design the website and design the interface for the games that go into the website, which is noradsanta.org. You’ve got to bring all these things together to make it all possible. Engaging with those folks early. And of course, we have a number of repeat partners,” said Hillier. “It’s something we have to re-engage in every year to make sure we have what we need in place, so we can provide the best NORAD Tracks Santa program possible to a legion of fans who look forward to it every year.”

Last year, Hillier said, there were approximately 1,500 volunteers, which is usually a pretty consistent number each year. “Obviously, we’re not going to have those types of numbers this year.”

Santa has been travelling the world on Christmas Eve for a very long time, Hillier pointed out, and he’s encountered many trials and tribulations to make sure he gets gifts to all around the world.

“For NORAD, our part, we’re just simply tracking his progress and doing our best to relate that progress to kids on Christmas Eve to the best of our ability. Certainly, we will continue to do that. You can call into 1-877-HI-NORAD to get phone updates or a recording. Also, you can go to noradsanta.org, which will have his location and also provide a number of games and other trivia to go through to get into the Yuletide spirit,” Hillier added.