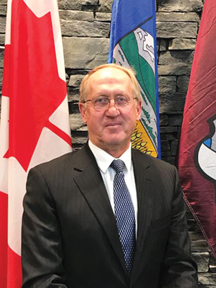 The Municipal District of Taber were adaptive and malleable during 2020, and so far, 2021 has proven to be similar to how last year ended.

With the pandemic ongoing, the first month of the new year has felt like the thirteenth month of 2020, and while the previous year was tough for all, the municipality was pleased with how they were able to reshape their inner workings amidst an unusual set of circumstances. The year of 2020 started with a big new hiring and from there, the MD was hit like the rest of the world with a global pandemic.

“January 2, 2020, was the first day of work for our new Chief Administrative Officer for the MD — Mr. Arlos Crofts,” said MD Reeve Merrill Harris.”He brought with him years of experience in an administrative capacity. Getting to know the staff and the community, and our municipal partners was the first thing on his mind as well as getting MD council’s vision and goals. We spent a day early on going over our strategic plan and goals for the coming years to help him understand what council wants to see happen in the municipality. Then COVID hit and most admin staff started to work from home, and council meetings were held via Zoom. This went on, as you know, for many months before we got the OK to meet in person and work at the office again.”

While normal life was affected, the MD was still able to go ahead with the majority of their expected work. Harris also touched on one of the municipality’s biggest concerns over the past couple of years — unpaid taxes on oil/gas properties.

“The infrastructure projects that we had planned for 2020 went ahead as usual. Unpaid taxes again this year was a big concern. As of the November deadline, there was $3.2 million in unpaid taxes, most of which is from struggling oil and gas companies. This put tremendous strain on the budget and some adjustments had to be made. But we are doing everything we can to maintain service levels the same.”

Harris pointed to the success the MD had in an unusual time due to the hard work of everyone at the municipality.

As the majority of 2020 saw a global pandemic, he was well aware that while work and projects looked fairly normal, it was anything but.

“Everyone did everything they could to keep the normal routine, even though for a while they were working from home, or attending meetings via electronic means. When we got to the recently announced restrictions, we adapted once again. Our public works department (road graders, gravel crushing crew, gravel hauling crew) Agriculture Service Crew, water treatment operators, everyone adapted and did the best they could to maintain service levels. They are all to be commended.”

In terms of projects completed that Harris looks back as the biggest successes in 2020, he had plenty of props to give.

“The ICF between the Town of Vauxhall and the Village of Barnwell was completed the prior year. These are required agreements, mandated by the Government of Alberta,” continued Harris. “We made great progress on securing funding from the Alberta government and federal government as well as our local municipal partners for the Regional Storm Water Project (Horsefly Spillway Project). We applied for and lobbied for grants from both levels of government, as well as kept eight municipal partners up to date on the efforts to get this project funded. Public works crews completed 40 miles of shoulder pulling around the municipality. Shoulder pulling is getting rid of the lip on the sides of roads allowing water to quickly drain off the roads, thus drying out the roads quicker after rains etc. Drying our roads quicker help minimize blowouts on roads.”

He also touched on several other projects completed.

“We collaborated with the Taber Irrigation District on projects around the MD, as well as the Bow River Irrigation district in the Vauxhall area and the St. Mary Irrigation District. One major project is the bridge structure replacement over the BRID main canal west of Vauxhall. Grant funding was received to replace that structure. We did a major road rebuild on Range Road 18-2 east of Enchant under the resource road program and got substantial funding for that project as well.”

With a new year already underway, the municipality has big plans for the next 11 months.

As it has been in previous years, the Horsefly Spillway Project remains top of mind for the MD as they get nearer to their end goal.

“We have many projects on the go, or are nearing completion. The drainage project south of Taber is bringing resolution to drainage issues that have been ongoing for 50 or more years. The rest stop at Vauxhall has been on the table for many years and partnering with Alberta Transportation on this has now brought this to completion. With the stimulus money received from the provincial government, numerous projects will be done in 2021 throughout the municipality. The Southern Regional Drainage Project is one that is high on the priority list. As the managing partner for this project, our administration has worked hard to get the funding in place, as well as getting the engineering and all aspects of this project rolling.”

Come fall 2021, the MD of Taber will also be gearing up for the next municipal election.

Election day for the MD is coming on Oct. 18.