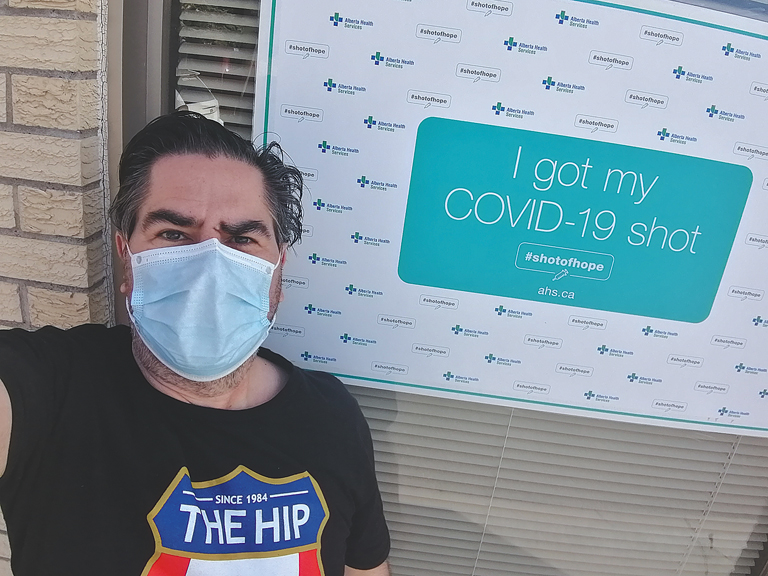 On April 13, Stan Ashbee, Taber Times editor ventured out to the Taber Health Centre to receive his first dose of a COVID-19 vaccine, due to a health condition. Currently, the health centre and local pharmacies throughout the province are offering vaccines to eligible southern Albertans, according to Alberta Health Services (AHS).

It is hoped, the majority of Albertans will saddle up to receive a vaccine to help stop the spread of COVID-19 and its variants.

With the current AHS vaccine rollout, vaccines are being distributed by different manufacturers. There has been some backlash and concerns with certain vaccines being administered because of potential side effects and other issues — which Canadian and Alberta health officials have discussed publicly. There may also be some Albertans who choose not to receive a vaccine at this time or moving forward.

It’s still going to be a long road ahead, it has been reported — and due diligence will have to prevail, as Albertans continue to hold the line with wearing masks, washing hands, hand sanitizing and not attending large gatherings and still practising social distancing and not visiting with friends and/or family for the time being. There is light at the end of the tunnel and together we can get through this.

“Honestly, I was a bit apprehensive about getting a vaccine at first, but always knew I wanted to get one. It was a no-brainer, in that, I have been following all the information out there about vaccines and the pros and cons. Overall, the experience was a positive one and the vaccine clinic was informative, efficient and caring,” said Ashbee.

“I was just happy to get any vaccine, to get some protection. The actual manufacturer was less important than getting a vaccine in my body,” said Ryan McAdams, group publisher for the Alberta News Group — which the Taber Times and Southern Alberta Newspapers is a part of. McAdams was eligible for a vaccine due to a health condition, as well.

McAdams noted, initially Canada seemed to be having a problem accessing enough vaccines to get ahead of the pace of the spread of the variants. “I think we need to do a better job as a nation. Not reactionary, but proactively addressing the vaccine concerns. I know we were a long way behind the pace early on, and I still think we are.”

“I feel it is improving, but the fact we were so far behind at the outset I think it’s allowed this virus to get a stronger hold in this third wave, as they’re calling it. If we had more vaccines earlier, it could have mitigated this third wave to some degree,” said McAdams.