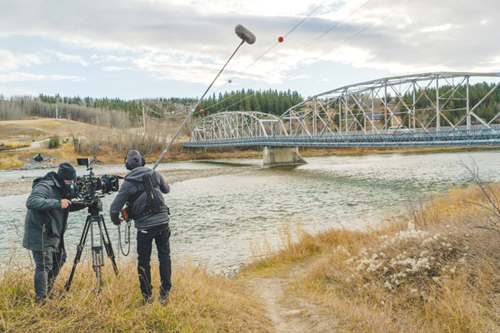 As part of the Film and Television Tax Credit program, the Alberta provincial government announced at a large March 26 press conference that “it is removing the $10-million per project cap to make the province an even more desirable location for larger film productions.”

This change also creates more flexibility for the province to respond to future growth in this sector and encourages the development of production studios here in Alberta. The tax credit has a significant return on investment, with every $1 in tax credits distributed creating roughly $4 that is reinvested into Alberta’s economy.

It is expected that successful Film and Television Tax Credit applicants will create thousands of good-paying jobs for Albertans, as removing the per project cap will embolden more longer-term television series to come to the province.”

Vauxhall’s Brock Skretting was named as a participant at the March 26 press conference.

Heavily involved in film and television production for the last number of years — amongst his latest television credits include being an assistant director with HBO, an assistant director on the TV series Wyonna Earp and a production assistant with FX Networks and motion picture wise — Paramount Pictures as a trainee coordinating producer on the movie Interstellar and also had the same role on the 2015 Oscar-winning film, The Revenant which featured Leonardo DiCaprio.

Skretting is currently the Head of Advocacy at Keep Alberta Rolling, a group which describes itself as “a locally funded grass roots non-profit organization created to showcase the benefits and potential of the Alberta Screen Industry. (Their) goal is to increase awareness of local success stories in the screen industry and educate the people of Alberta on the vast opportunity it presents for creation of jobs, economic diversity, and foreign investment.”

In a phone interview with Southern Alberta Newspapers recently, Skretting was ecstatic at the government announcement and couldn’t have been more excited with the possibilities and what it means.

“Alberta is now competitive for bigger productions. We have seen a fair number of medium-sized and large productions in the past, but what this does is it opens the doors too for more large series — large series that have extremely large budgets over $80 million,” explained the amiable University of Lethbridge graduate. “Alberta is competing on the world stage and some of those shows, like you consider something like Game of Thrones for example, trying to attract those shows to Alberta. Game of Thrones for Northern Ireland, built a crew base and created a long term sustainable film industry in Ireland and created a huge tourism boon as well. These are some of the benefits we have been advocating or talking about with the Alberta Screen industry for quite a while.

“It is a perfect industry for the unfortunate situation we are in where obviously there’s uncertainty with COVID, there’s economic challenges in other sectors, but we can actually employ people who have skills from other sectors. In the film industry there is so many hats which are needed to put together a project. We need carpenters and painters to built sets. We need set creators to fill the sets with items so the sets are realistic. We need hair, make-up and wardrobe people. We need organizers, we need drivers. These are skills that are needed in other industries and in harder-hit industries right now so we are really looking to bring new people into the industry and to make some big projects and we are very grateful for the announcement which happened on (March 26) for sure.”

He says it will make a huge difference. COVID shut down and hindered many aspects of the economy in 2020 but Skretting says in the film industry they are looking at the economy impacted by creating thousands more jobs and in doubling up to $400 million if they land all the projects that are currently looking to set up in Alberta.

“It looks like a record year in Alberta and we want to ride that momentum a bit and make sure we are continuing to advocate and continuing to explain that there are so many skills and so many sectors,” explained Skretting. “As much as we love the actors and actresses and directors, it’s also all these trades jobs, it’s the carpenters, the cooks, it’s operators, it’s electricians, it’s painters, it’s wardrobe people. It’s spending in Alberta businesses and we know that Alberta businesses have been hit hard by the pandemic. There is spending on materials they need to have… they are spending locally…a lot of spending on Alberta businesses. When the show finally comes out (everyone involved) telling everyone about visiting Alberta and that we can help the tourism industry…it’s a good way to market the province.”

While applauding the announcement, the NDP opposition says it is still flawed.

“I’m pleased to hear that the per-production cap has been removed in the Film and Television Tax Credit. However, (March 26)’s announcement does not remove the overall budget cap, keeping Alberta steps behind other jurisdictions,” NDP Critic for Culture Nicole Goehring stated. “When this credit was created, the film and television industry told the UCP that a cap on the overall budget would hinder Alberta’s ability to be competitive in the market. The juried system that the UCP has with this credit will pick winners and losers during a time that we should be opening our doors to all productions, big and small, to help in our economic recovery. The UCP must make this program a true tax credit, and remove the overall budget cap so Alberta can have a competitive advantage on the world stage.”

Skretting says they are thankful Minister of Jobs, Economy and Innovation Minister Doug Schweitzer for the acknowledgement of the industry.

“(Schweitzer) is going to bat for diversification and he is looking for projects to come to Alberta so they did put in basically an estimate in their budget of $50 million, they have indicated they are flexible on that if a good project comes and we can crew it and we can get people working on it and they want to see that film in Alberta so it is still a possible concern but as far as I can see, the government has taken a leadership role as far as economic diversification so I think the support will be there.”

Skretting says he has been getting a lot of working in with the lobbying aspect as far as the film industry goes as he talks about mutual “film friendliness” with rural civic politicians and community economic leaders. Skretting is a firm believer in how strong it can be in rural Alberta pointing to Dinosaur Park and the Brooks area, Drumheller and High River and the past benefits incurred.

“There’s so much to show case,” added Skretting about rural Alberta.