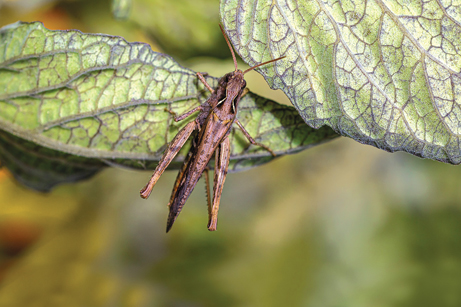 The summer heat and less precipitation throughout the past few months has led to a higher than normal grasshopper population across the Municipal District of Taber. While other municipalities have experienced higher numbers, which has led to more problems, the M.D. of Taber has still seen more than they would like as August continues.

“Our numbers are elevated this year. Naturally, we saw them coming up last year and there are little pockets around the municipality, but we certainly don’t have grasshoppers like we’re seeing come out of other municipalities,” stated Jason Bullock, director of Agricultural Services. “Our highest numbers are going to be pushing into that top northwest corner, coming in out of Lomond, Carmangay country where they were really high last year. But, I haven’t heard any exact reports. We will be starting our grasshopper surveys in a couple of days.”

According to alberta.ca, the M.D. of Taber was forecasted for ‘light’ to ‘very light’ for the majority of the municipality in 2021.

“In southern Alberta, dry summers are resulting in increasing grasshopper numbers. This is especially true in the M.D. of Acadia, Vulcan, Willow Creek, Lethbridge, Cardston, and Forty Mile counties. The rest of the province shows light to no grasshopper populations,” reads the website.

“Grasshoppers do well in this kind of conditions — dry and hot. So, we’ll see an explosion unless we turn it around and are wet and cool, is that correct?” asked Reeve Merrill Harris.

“That is correct, water and rain showers — when grasshoppers are just hatching, one raindrop will kill a grasshopper, it’ll drown it at the young infant age. We haven’t had many raindrops this year, hence the gopher problems and the grasshopper problems,” added Bullock.

While 2021 has been great weather for the grasshoppers, it was pointed out 2020 also saw high populations late in the ag season.

“Last fall, and of course that’s different than this year, the grasshoppers came in thick and heavy into that west and north corner, but the crop was long gone and combined by then. It’s come early this year, but that’s the weather,” stated Bullock.

One concern being raised though is the high population of grasshoppers in Montana and the potential they will travel north to Canada. The 2021 Rangeland Grasshopper Hazard map of Montana shows high density in various spots across the state, particularly in the central and southeastern parts of the state.