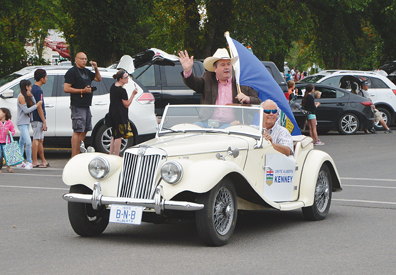 Last week, Premier Jason Kenney surprised the province by announcing his intention of stepping down as the leader of the United Conservative Party. While the results of the UCP leadership review saw Kenney gain 51.4 per cent approval and while he had maintained a stance that he would return if gaining over 50 per cent, that wasn’t the case come Wednesday night. Of the 34,298 party members who mailed in ballots by the May 11 deadline, 17,638 said yes and 16,660 said no.

“Friends, tonight the members of our party completed a democratic exercise in accountability. The result is not what I hoped for, or frankly what I expected, but I have been clear from day one that I will respect the decision of the members in this leadership review. And I expect all of our members of our party to do just that. Friends, while 51 per cent of the vote passes the constitutional threshold of a majority, it is clearly not adequate support to continue on as leader — and that is why tonight I have informed the president of the party of my intention to step down as the leader of the United Conservative Party. I’m sorry, but friends, I truly believe that we need to move forward united, we need to put the past behind us, and a large number of our members have asked for an opportunity to clear the air through a leadership election. I recommended therefore that the provincial board schedule a leadership election in a timely fashion,” stated Kenney to a crowd gathered at Spruce Meadows in Calgary.

Kenney pointed to the past two years of COVID as a reason for such a swing in divisiveness in the province. He also pointed to things he saw accomplished since the UCP were put in power in 2019.

“I want to thank all members that participated in this process and the hundreds of volunteers that have pitched in,” continued Kenney.

ere and right across the province for your support and tireless efforts of those who have had confidence in my continued leadership. Friends, it’s clear the past two years were deeply divisive for our province, our party, and our caucus, but it is my fervent hope that in the months to come, we all move on past the division of COVID and as disappointing this result is for me, I am incredibly proud of the work this team has done. Together, we reunited the free enterprise movement in Alberta politics and we won the largest electoral mandate in our province’s history. We inherited profound fiscal and economic challenges and then we went through three once in a century crisis,” continued Kenney. “The largest public health crisis in a century, the largest collapse of the world economy in nearly a century, and the first time we experienced negative oil prices. And yet, despite all of that, we got the job done — delivering on nearly 90 per cent of our election commitments, while turning around our economy so we’re leading Canada in economic and job growth, balancing the budget for the first time in 14 years, and paving the path towards a new era of diversification. Putting parents back in charge of education, passing the Education Act and so much more.”

Locally, Cardston-Siksika MLA Joseph Schow was disappointed with the results from the leadership review.