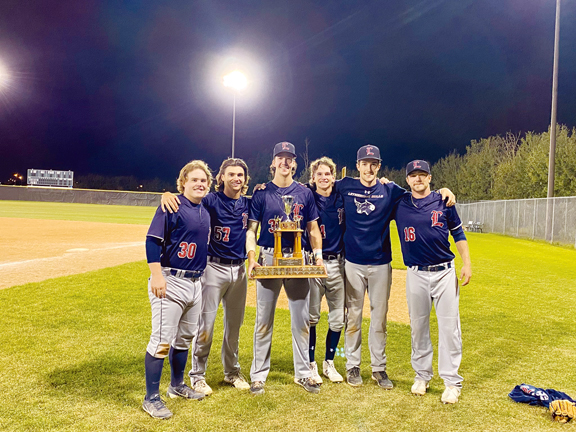 For their first three games of the playoffs, the arms of the Lethbridge Bulls’ starting pitching staff carried them.

On Saturday night, the Bulls’ bats took over and now they’re the Western Canadian Baseball League champions for the second time in six years following a 16-5 win over the Edmonton Prospects in Game 2 of the WCBL best-of-three final.

Up 5-3 on the Prospects after five innings of play, the Bulls did their damage at the dish, hammering out eight runs in the sixth inning for a commanding 13-3 lead that was never in jeopardy the rest of the way.

Meanwhile, Bulls relief pitcher Bryce Oriold-Fraser took over for starter Kyle Poapst in the fourth and threw five and two-thirds innings, giving up two runs on five hits, walking two and striking out eight to earn the championship-clinching win.

It also earned Oriold-Fraser the playoff Most Valuable Player award after the local right-hander went the distance in Game 1 of the Bulls opening round series against the Sylvan Lake Gulls last Monday in Sylvan Lake to get the post season ball rolling.

And when Oriold-Fraser sent Edmonton’s Jonny McGill down on strikes to end Saturday’s game, the Bulls celebration was on.

The teams scored a pair of runs to start. Lethbridge opened a 2-0 lead after the first before the Prospects tied it at 2-2 in the bottom of the second.

The Bulls moved ahead 4-2 in the third and never trailed again before putting an exclamation point on the win with the eight-run outburst.

“Kyle gave us a few good innings and then Bryce came in and shut the door,” said Wheatley. “Our offense and came alive and did what they had done all year.”

Bulls outfield Josh Kabayama walked in the first run when catcher Noah Or was hit by a pitch with the bases loaded before Carlin Dick doubled in Mike Fitzsimmons and Penner.

Haney rounded out the sixth inning with a bases loaded walk.

“That sixth inning we got a couple of guys on and got some timely hits and kept going snowballing,” said Dick, who batted 3-for-5 Saturday with three runs scored and two RBI. “The base runners were huge for us.”

“Our entire lineup, especially our one-through-six all year have been really consistent and hit phenomenal all year,” said Wheatley. “Brad and Carlin showed up in this game again and it was great.”

It also kept the Bulls from having to come back to Spitz Stadium for Game 3, which would have been Sunday night.

“It just took us playing the same game we’ve been playing all playoffs,” said Penner. “Our pitching showed up again and our bats maybe haven’t been there in the playoffs as much as they were in the regular season, but we knew that would come and tonight it really showed up. That showed in the run column. We played our game and were fortunate to have the win. We just stuck to the basics and played our game. We knew we were in good shape if we played the game we know we can.”

The Bulls finished the regular season in third place at 19-21 following a six-game losing streak to end the season before going on a perfect 4-0 run in the playoffs.

“It’s just a phenomenal group,” said Wheatley. “We had our ups and downs and they stuck with it all year and showed up when it counted. It’s just a great group of kids.”

Dick pointed the his team’s resiliency when things got tough.

“We’ve had a ton of ups and downs this year, a lot of lows and a lot of highs,” he said. “If I look back on this team in a couple of years it would be the resiliency. It also helps we’re a super tight-knit group. Everybody gets along, but we were definitely a resilient group of guys and it definitely showed in the playoffs.”

Or was one of the runners-up for playoff MVP.

“It feels good,” he said Sunday afternoon at Spitz Stadium after the Bulls arrived back in town. “It just feels good to be back playing. Playing again was the biggest part about coming to Lethbridge this summer.”

Penner recalled showing up at the start of the season and seeing the abundance of few faces.

“So it was hard to really know where we were going to be at. But I knew right away we were a really talented group and we showed that all year. I’m proud of every single guy in this locker room. We were able to bear down when it matter most and play our best baseball when it mattered most in the playoffs. So that was huge and I’m just happy with this group of guys.”

Now, the guy who grew up watching a Bulls game or two brings a WCBL title to his home town.