Posted on November 25, 2021 by Vauxhall Advance 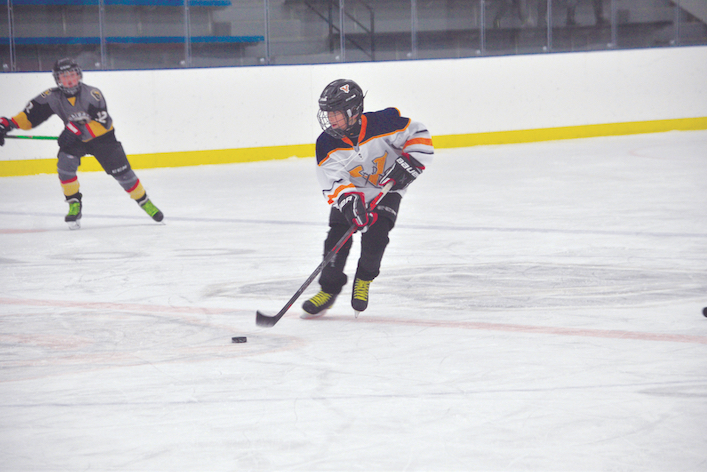 ICE SHOW: Cole Bouchard was all over the ice earlier this month in Coaldale. Bouchard has continued his strong play in the regular season as he collected 10 points over the weekend. ADVANCE PHOTO BY COLE PARKINSON

With the tiering round done in the Central Alberta Hockey League, the U11 Sabres found themselves starting the season in Tier 3 Blue.

Other teams in the division are Bow Island/Foremost, Coaldale, Irvine, Picture Butte, Raymond, Redcliff, and Taber.

This past weekend, the Sabres had two games on tap.

On Saturday, they went south to Taber for a match-up against the Oil Kings. In a back and forth offensive game, the Sabres would fall 11-10.

Jhett Stober, Cole Bouchard, and Grayson Honess led the way for the Sabres. Stober netted a hat trick and two assists, Bouchard had two goals and three assists, and Honest had a hat trick and one assist. Lincoln Deleeuw had a pair of goals, while Austin Odland, Peyton Honess, and Quaid Finlayson each had an assist.

Nash Stober got the start in net for the Sabres.

The team hoped to rebound on Sunday when they welcomed in the Coaldale Cobras. In another high octane offensive game, the Sabres would lose a close 10-7 battle. Bouchard put on an offensive clinic in the game as he put forth five goals for the Sabres. Deleeuw had a goal and two assists, Odland had a goal and an assist, while Oakley Wall, Grayson Honess, and Peyton Honess each had an assist. Gavin Bilsky was in between the pipes for Vauxhall.

The Sabres have another pair of games this coming weekend. On Saturday, the team travels to Foremost to take on Bow Island/Foremost for a 1 p.m. puck drop. They then return home on Sunday for a game against Raymond at noon at the Vauxhall Arena.