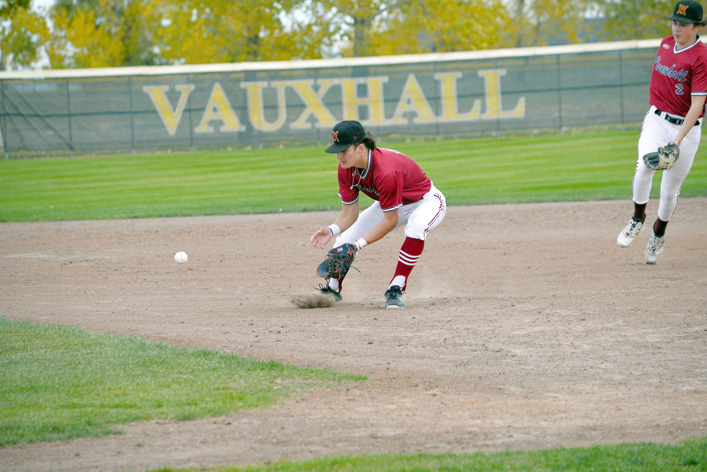 It was another weekend of spring baseball as the Vauxhall Academy of Baseball Jets were back on the diamond for a three-pack of games.
Friday saw them back on the Lloyd Nolan Yard field as they once again took on the Prairie Baseball Academy JV squad. In a repeat performance, the Jets once again saw a big score on their side of the scoreboard when all was said and done. The Jets took a 4-0 lead after the first inning before exploding for 10 runs in the third. PBA would answer back with one of their own in the fourth and then seven runs in the fifth. The sixth and seventh innings saw no runs for either side, but VAB would score once in the eighth inning and five in the ninth. PBA meanwhile would score three of their own in the ninth, but would fall to Vauxhall 20-11.
Demitri Shakotko led things off for the Jets and he scored two runs, had a single RBI, and had three walks. Jack Wheatley had a fantastic day at the dish as the infielder had a pair of home runs, a single, four RBI, and a walk. PBA pitchers had trouble putting away Cardel Dick at the dish as the Jet went 4-5 with two RBI. Looking at the rest of the lineup, Jared Bendfeld had a double, Adam Vulcano had a double, a walk, and two RBI, Brennan McTavish went 2-5 with three RBI and a walk, Colin Fisher had a single and a walk, Keegan McNeil went 1-4 with an RBI and a walk, Eric Reiling had a single and two RBI, and Carson Boyko went 1-4 with an RBI. Vulcano would also rack up a stolen base in the win. In nine innings of work, Jets’ batters saw 15 hits, 10 walks, and 13 strikeouts.
The Jets sent three pitchers to the mound in the game with Garrett Smith getting the start for VAB. Smith gave up two hits and one earned run and struck out seven over four innings of work. Parker Austin came in for middle relief and was hit hard as the lefty gave up six runs and seven earned over two innings. Matthew Mackenzie finished things off with three innings and the pitcher issued one free pass, two hits and two earned runs to go along with one strikeout.
Saturday saw more beautiful baseball weather as the Jets returned to Lethbridge for a doubleheader against PBA and Badlands Academy.
While Friday saw another lopsided score when all was said and done, Saturday morning’s matchup resulted in a much closer affair for the Jets and PBA. While the Jets would take a 1-0 lead after the first inning, neither team could plate any runs through the second, third, or fourth innings. The Jets would break that streak in the fifth with four runs and take a 5-0 lead. With only seven innings on the docket, they took a 5-0 lead into the final inning and while PBA JV was able to muster up a run, that would be all they would get as the Jets took the game 5-1.
Shakotko went 1-2 with a double, two runs, two RBI, and a BB while McTavish had a walk, Kyle Yip had a single and walk, and Kayden Hleucka had a single and RBI. Bendfeld also drew a walk while Riley Pearce had a single, Vulcano had a double and BB, and Raphael Ranger had one hit and one RBI. Shakotko, Yip, and Hleucka also stole a base each. Over seven innings the Jets had six hits, five walks, and they struck out seven times.
David Stewart was the starting pitcher for the Jets in the first game of the day and he was masterful going four innings, only giving up two hits and striking out four. Kaleb Andersen was the next man up and upon taking the mound, he would strike out five, allow two hits, including a home run, over three innings.
The Jets wrapped up the weekend with a game against Badlands Academy on Saturday afternoon, and once again, the Jets were dominant on both sides of the ball. They would score runs in every inning but the eighth, and win 21-2. Brett Getz got the ball to start the game and he would go three innings, striking out six batters and giving up three hits and one earned run. Drew Lenehan was up next for Vauxhall, and he would go three innings of shutout ball with three strikeouts, two walks, and a hit. Mason DeRuyck was last on the mound and the pitcher surrendered two hits, one earned run, two walks, and would strike out five Badland hitters.
The Jets’ lineup was firing on all cylinders once again as Badland pitchers struggled to get outs. Shakotko went 2-3 with a walk, Clemett scored a run, Wheatley had a double and single, Dick was 3-4 with three doubles, three RBI, and a walk, Yip was 2-4 with an RBI and three walks, and Hleucka had a single and RBI. Vulcan had a single RBI and two walks, Reiling also had an RBI, McTavish went 2-5 with a double and three RBI, Pearce had a double and an RBI, McNeil had an RBI, Ranger crushed a home run and had two singles to go along with three RBI and a walk, and Boyko had two BB.
Overall, the Jets saw 16 hits, 13 walks, and 10 strikeouts offensively.
The spring season rolls along for the Jets this weekend as they play their first home games of the season on Saturday and Sunday. On Saturday, the Jets take on the U of Calgary JV squad for a doubleheader with games starting at noon. Sunday, the U of Calgary SV squad comes to Vauxhall for a doubleheader with games starting at noon as well.