Ag society has many success stories

Jo Jones has been a longtime member of the Vauxhall Ag Society and has had a very successful 2019 show season with her three-year-old AQHA gelding Barkley. 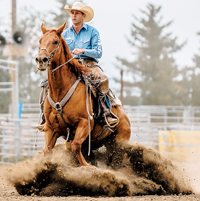 Titus Kropf is another Vauxhall Ag Society member who has also had a very successful 2019 year at many team roping and ranch rodeo events.

Another big win Titus had this past summer was the Nanton Ranch Rodeo that he won with his teammates, which consisted of his brother Jess Kropf, Riley Regier and Tracey Shock. Within this competition he also placed third in the working cow horse portion, against some tough competition. 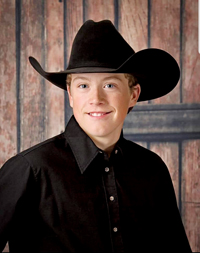 Vane Ferguson is one of the Vauxhall Ag Society youth members that has had some wonderful accomplishments. 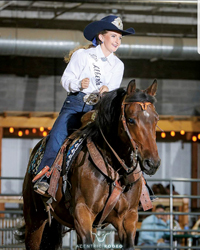 Jessie Ferguson is another of the Vauxhall Ag Society youth members who has been showcased for her successful year as the Alberta High School Rodeo Association 2019/2020 Queen where she competed at the National High School Rodeo Finals Queen Competition and placed in the top 10. Ferguson was also very successful at the Alberta 4-H Provincial Communication Competition this past spring, winning first in the Sr. presentation category.

This now allows her to travel to Toronto, Ontario to the Royal Winter Fair, where she will be competing against some of the best youth speakers from across Canada at the Canadian Young Speakers Competition on Nov. 2.

This will be an amazing event where she will be promoting youth and their involvement in the future of agriculture within Canada on behalf of 4-H Alberta and also The Alberta High School Rodeo Association.

These above noted individuals along with many others are proud members of the Vauxhall Ag Society and use the Vauxhall Rodeo Grounds facility to practice, train and compete in to better their skills, which in turn promotes the organization and community.